Tirupati, 16 Dec. 19: The Executive Officer of TTD, Sri Anil Kumar Singhal has instructed officials to increase the number and plying frequency of Dharma Rathams – free buses for benefit of devotees to move from one area to another at Tirumala.

During senior officers review meeting at the TTD administrative building on Monday the EO also asked the officials of the HDPP to prepare a calendar of programs in view of the enhanced and extended activity for the propagation of Hindu Sanatana Dharma.

He instructed the concerned to keep religious booklets on sanatana dharma at all bhajan mandir in remote regions in the state for benefit of school children.

He also wanted that TTD diaries and calendars also should be made available at all locations in Tirupati and Tirumala.

The EO also directed the engineering department to quickly select a qualified agency for electrical decoration of the Sri Kodandarama Temple at Vontimetta.

He directed officials to explore the possibility of putting of public notices and signboards at local temples recently taken over the TTD. “The Officials also should conduct an audit on the operation of air condition machines at TTD rest houses in Tirumala and Tirupati”, he said. Later he directed them to utilize LED bulbs in all rest houses and reduce power costs.

He advised the IT wing for installation of more computers in Srivari Seva Sadan to get better and quick feedback from pilgrims. 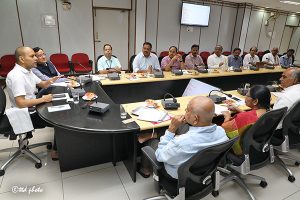 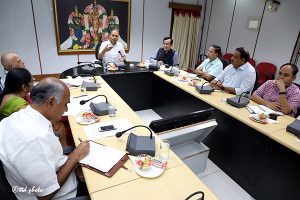