KALYANAMASTU TO BE RELAUNCHED FOR THE BENEFIT OF POOR- TTD CHAIRMAN

Tirumala, 4 Feb. 21: The Gudiko-Gomata program launched by the TTD as part of the propagation of Hindu Sanatana Dharma which has been successfully grounded in four states of Andhra Pradesh, Telangana, Karnataka and Delhi said TTD Chairman Sri YV Subba Reddy.

Participating in Gudiko-Gomata program in Sri Kasi Vishweswara temple at Sathyanarayanapuram in Vijayawada on Thursday wherein he presented a Kapila Gow (black/dark skinned cow considered as most auspicious) by the Sri Gayatri Society he took part in the puja.

After performing Go puja the Chairman said the TTD had taken up the Gudiko Gomata campaign under directions of AP Chief Minister Sri YS Jaganmohan Reddy for the propagation of Hindu dharma.

He said TTD will present a pair of cow and calf to temples anywhere in the country who shoulders responsibility for maintaining them.

Adding further he said TTD has launched several programs for the propagation and protection of Sanatana Hindu dharma.

TTD will soon relaunch the Kalyanamastu program facilitating the mass weddings of the poor free of cost, he added.

He said under the aegis of the HDPP, TTD proposed to speed up the construction of 500 Venkateswara Swamy temples in SC/ST and fishermen remote villages in both Telugu states which were delayed due to Covid-19. 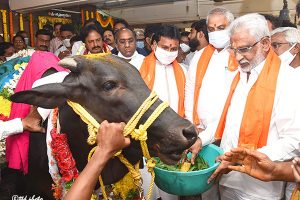 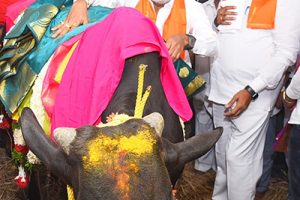 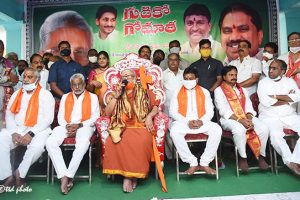