Tirupati, 15 Sep. 20: The Centre should exempt the TTD from the burden of GST arrears payable on the services of Special Protection Force (SPF) from the period April 1, 2014, till September 30, 2020, sought TTD Chairman Sri YV Subba Reddy to the Union Finance Minister Smt Nirmala Sitaraman.

He made this appeal when he called on the Union Finance Minister at New Delhi on Tuesday and informed her that this would facilitate TTD providing more financial strength to pursue its social, economical and spiritual activities with more vigorously.

He also sought permission for depositing old Rs 500 or Rs 1000 notes contributed by devotees in the temple Hundis either with RBI or other nationalised banks.

He said since the Central government banned Rs 500 or Rs 1000 notes on November 18 in 2016, TTD has made arrangements for cashless transactions in its activities. However, in view of devotee sentiments, TTD could not stop them from contributing old notes in the Srivari Hundi. As a result, nearly 1.8 lakh Rs1000 old notes and 6.34 lakh Rs 500 notes have been accumulated with the TTD coffers since then.

He said correspondence with Union Finance Ministry and RBI on the conversion of old notes since 2017 has not yielded any favourable response till date.

The Chairman said the facilitation of conversion of old notes could embolden the TTD to take up many more religious and service-oriented activities.

He appealed to the Union Finance minister once again to respond favourably to resolve the accumulated old currency notes of ₹1000 and ₹500 at the earliest. 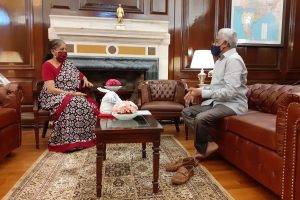