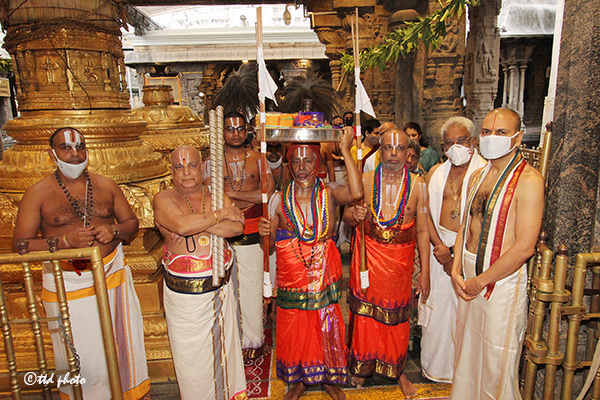 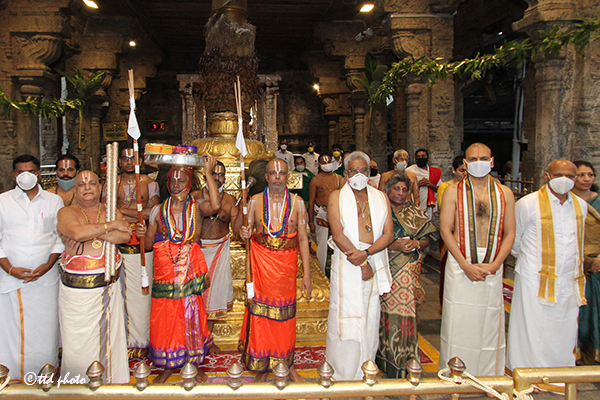 Tirumala, 16 Jul. 20: The traditional annual budget festival, Anivari Asthanam was conducted at the Srivari temple on Thursday morning in Tirumala.

Speaking later to media outside the temple, the TTD Chairman said as a part of the annual festival, silks were offered to Srivaru from Sri Ranganathaswami temple of Srirangam.

He said Nitya Kainkaryas, utsavas and rituals were performed without any lapse by archakas in supervision of the TTD staff in spite of Corona restrictions. Srivari darshan is also continued in a limited way with social distancing and total sanitisation in the temple and surroundings. He said every day Srivari blessings are sought for the overall health and well being of humanity across the world.

Earlier between 7am and 9am, Sri Malayappaswamy and His consorts were seated at Ghanta Mandapam near Bangaru Vakili. While Senadhipathi Sri Viswaksena was seated on the left side. The annual event of Anivariasthanam was celebrated with special pujas and prasadam Nivedanas for utsava idols and Mula Virat together.

Thereafter the Tirumala pontiffs led the procession of offering of silks from Srirangam on six big gold plates of which four plates were offered to Mula Virat and rest two plates to the utsava idols of Sri Malayappaswamy and Sri Viswaksena.

Later on the Srivari Temple Chief Priest, Sri Venugopala Deekshitulu performed the rituals of blessings and handed over of temples key bunch to the Tirumala pontiffs, TTD EO and after other pujas the key bunch of Srivari temple was placed at feet of Mula Virat.

Anivara Asthanam ritual is performed as a day of account submission to Lord, a practice started by the Mahants, the past managers of Srivari temple. Legends say that the Mahants took over the management of the Srivari temple on this day and the receipts and expenses statement of the temple administration were presented on the auspicious day.