Tirumala, 25 November 2019: TTD Additional Executive Officer Sri AV Dharma Reddy said that the Srivani Trust is gaining popularity among devotees and on Monday 209 donors who have contributed for the trust have darshan of Lord Venkateswara.

Speaking to reporters outside the Srivari temple on Monday, the TTD Additional EO said that the objective of the Srivani trust is to build Sri Venkateswara temple in remote villages and to spread the Sanatana Hindu dharma and avoid religious conversions.

The trust was launched on May 25. But the protocol darshan has been linked to the contribution of the trust ranging between Rs.10000 to Rs.99, 9999 has commenced from October 21 onwards. In the last one-month over Rs.3.21crores donations have been accumulated to the trust. The online quota has also commenced from November 4 onwards”, he added.

It may be mentioned here that on Fridays 200 break tickets and 500 tickets on other weekdays are provided on-line and as of December 31 quota has been uploaded. Since November 4, till date 1961 donors had contributed to the trust from all over the world and boomed their VIP break darshan tickets.

Such ticket holders could walk-in directly for darshan through the Vaikuntam queue complex and they could also book their laddu requirements online. For such a ticket holder’s 50 rooms were made available at the Vakulamata Rest house.

The additional EO said donors to Srivari trust hailed from USA, Georgia, Dubai and Singapore and the contributions towards the trust included 33% from AP, 22% from Telangana, 20% from Tamil Nadu and 17% from Karnataka. 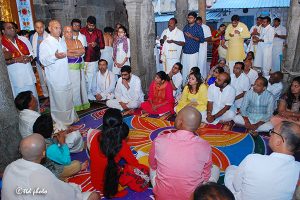