Tirumala, 18 Sep. 20: All the arrangements are in place to conduct Srivari Annual Brahmotsavams from September 19 to 27 in Ekantam in view of COVID 19 restrictions, said TTD Trust Board Chairman Sri YV Subba Reddy.

Addressing media persons during a press conference held at Annamaiah Bhavan in Tirumala on Friday, the Chairman briefed them on the important days and events during the nine-day fete.

He said Ankurarpanam will be observed on September 18 between 6pm and 7pm while Dwajarohanam between 6.03pm and 6.30pm in the auspicious Meena Lagnam as fixed by the Agama pundits.

On Vahana Sevas he said, after consulting the Chief Priest and Agama Scholars, it has been decided to observe all morning and evening Vahana Sevas in Kalyanotsava Mandapam. Every day Morning Vahanam is observed between 9am and 10am

The same day, Honourable Chief Minister of Andhra Pradesh Sri YS Jaganmohan Reddy will present the silk vastrams on behalf of AP Government to Srivaru on the day of Garuda Seva.

This year, instead of the Swarna Ratham on September 24 and Wooden Chariot procession on September 26, Sarvabhoopala Vahanam will be conducted. On September 27 the annual Brahmotsavams concludes with Chakra Snanam. There will be live telecasting of all Vahana Sevas and special rituals in SVBC for the sake of devotees who are present globally. While the Public Relations Department will disseminate the information to the world via media”, he added.

TTD Chairman initially refused to enter into a political dialogue at Holy shrine of Tirumala but was pressed by the media to respond on charges made by opposition leader and former CM Sri N Chandra Babu Naidu against AP CM Sri YS Jaganmohan Reddy and TTD.

He said Dr Subramaniam Swamy, Rajya Sabha MP has filed a PIL in high court seeking auditing on misappropriation of funds in TTD during TDP regime from 2014 to 2019 by an independent agency. When consulted the same with AP CM, he directed that not only the past regime, but also the financial activities of the current regime in TTD should be subject to auditing by CAG to have transparency. Following the directive of CM the TTD board has resolved for auditing by CAG for all annual financial activities.

Seriously refuting the charges the Chairman said, no evangelical activity took place at Tirumala. In the issue of RTC bus tickets carrying other religion Yatra marks found at Tirumala, the printing of the tickets took place during the TDP regime only.  In the police enquiry it was also proved and action has also been taken against the miscreants.

No special grants have been given to Sharda Peetham but funds were given for Loka Kalyan programs as was done in past also to Sharada peetham. “TTD has been giving funds to nearly 30 religious mutts and institutions which have been doing their bit for the propagation of Hindu Sanatana Dharma”, he added.

People of all religions who have faith and belief in Sri Venkateswara Swamy are coming for Srivari Darshan.

The middlemen system and corruption entertained by the past TDP regime, has totally eradicated now in Tirumala.

Reacting on the allegations related to the temple, TTD EO Sri Anil kumar Singhal said the SVBC could not give live telecast Sri Ram Mandir Bhumi puja at Ayodhya on August 5 as the event time clashed with Srivari Nitya Kalyanotsava Seva which is telecasted live and witnessed by millions across the world. However, he said, the Bhumi Puja event was displayed well in the News bulletin and also a special program on SVBC later.

Over the charges on Hundi cloth, the EO said, Srivari temple hundi will be changed soon after the Hundial gets filled with the offerings by devotees. 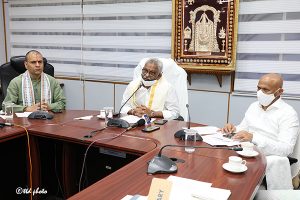 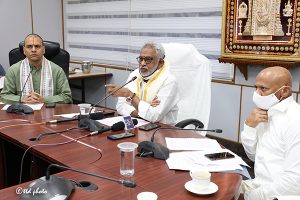 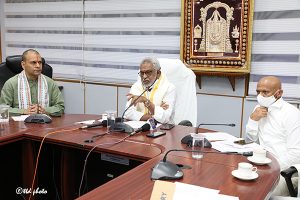 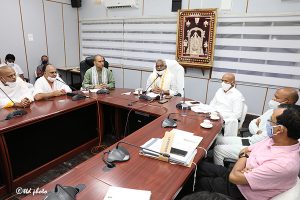