Speaking at the press meet in the Media Center on Thursday he said on Garuda seva day 2 lakh packets of Pulihora, 1.75 lakh Tomato rice and Bisibela bath were readied for distribution among devotees besides milk, buttermilk, snacks, drinking water and annamprasadams.

TTD has deployed ten mobile food distribution vehicles and the Anna prasadam complex will be open from 7.30am till 11.00 pm during all days and on Garuda seva day will operate till 1.30 am.

While food packets will be provided to devotees on the mada street galleries till 6pm. Buttermilk for children, coffee and tea for elders will be given on 24 hours basis. While food courts were set up on walkers paths,Vaikuntam Queue complex. Nearly 10,000 personnel including employees, Srivari Sevakulu, Scouts, TTD Vigilance, Police and others were provided food at the employees canteen during brahmotsavams,  he added.

He said presently 1085 persons were engaged in food arrangements during Brahmotsavams and 250 more would be deployed during Garuda seva day. Nearly 1000 Srivari Sevakulu were being deployed to serve devotees in 175 galleries of Mada streets. Food is supplied to devotees after tested by food experts in TTD labs,  he said. 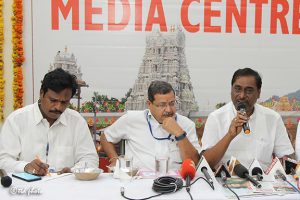