Tirupati, 17 September 2021: In a rare and interesting incident of its kind, Sri Viswanath Poosala, the son of a retired TTD employee and a former student of SV Balamandir School became an inspiration to many students who are pursuing education in TTD-run schools.

A peep into the success journey of this lad from Tirupati who is now holding a coveted post in Facebook at the USA really makes not only his family feel proud but also the Institution of TTD which laid him the foundation.

Many who pursued education in TTD educational institutions have won global acclaim in their respective professions. One among such personalities is Sri Poosala Viswanath, studied in the TTD-run school of SV Balamandir at Tirupati from 1976-81. Later he pursued his higher education in SV High School from 1981-85 and in SV Junior College from 1985-87.

After completing his college, he got into IIT and became the first IITian to be selected from a TTD school. After completing computer science from 1987-91 in IIT Chennai, he did his PhD in Wisconsin, USA between 1992-95. Now, he is holding a coveted post in Facebook at the USA.

Sri Poosala Anjaneyulu, father of Sri Viswanath who retired as Deputy Executive Officer in TTD and Sri Suresh Poosala, his elder brother are instrumental in guiding him.

The family of Sri. Poosala Anjaneyulu met with EO Dr. K. S. Jawahar Reddy in his chambers in TTD Administrative Building on Friday. On behalf of Sri Poosala Viswanath and his spouse Smt. Dharani, they handed over a cheque of donation for Rs. One Crore to EO and sought him to utilize the same to any of the Trusts run by TTD.

TTD EO also appreciated the thanksgiving gesture of Sri Viswanath and his family. He said the success story of Sri Viswanath will be a true inspiration to many students who are pursuing education in TTD Educational institutions. 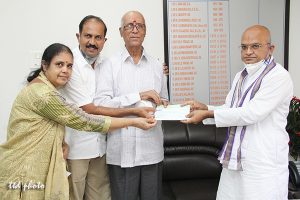 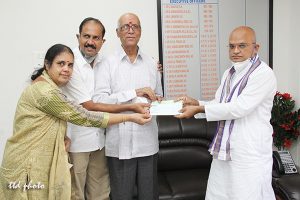