Tirumala, 4 Jan. 20:We have earmarked the entry points for queue lines and also in mada streets for the convenience of the pilgrims, said, TTD EO Sri Anil Kumar Singhal.

The EO along with Additional EO Sri AV Dharma Reddy and CVSO Sri Gopinath Jatti convened a media conference at Annamaiah Bhavan in Tirumala on Saturday and briefed them on the arrangements for Vaikuntha Ekadasi and Dwadasi.

He said, on Vaikuntha Ekadasi day, the darshan commences at 2am and will lasts up to three hours for protocol VIPs and the darshan for common pilgrims starts at 5am on January 6. First all the VQC 2 compartments will be filled up followed by the sheds in Narayanagiri Gardens, later in Mada street galleries and finally in the queue lines at Kalyana Vedika. A concrete plan has been chalked out for the distribution of Annaprasadam and three lakh water bottles is kept ready at 172 locations for distribution to pilgrims, he added. The EO said on Vaikuntha Ekadasi Day there will be procession of Swarna Ratham between 9am and 11am while on second day on Dwadasi, the Swami Pushkarini Theertha Mukkoti will be observed and the Sudarshana Chakrattalwar will be offered Chakra Snanam in the holy waters between 4.30am and 5.30am.

The Additional EO said, the SRIVANI Trust donors will report at 10am and will finish off their darshan in less than an hour after commencement of their turn for darshan. He said they will report at VQC 1 and will be provided Maha Laghu Darshan along with any other common pilgrims on this auspicious day.

CVSO said, the devotees will be sent through Alwar Tank Rest House point into VQC 2 and later in to the sheds of Narayanagiri Gardens based on first come first basis. “The devotees who are joining will be sent through N1 Entry point near Medaramitta into the galleries of Mada Streets through W7 Gate. We have also deployed our men, police, sevaks and scouts to operate the queue lines in a systematic manner”, he added. 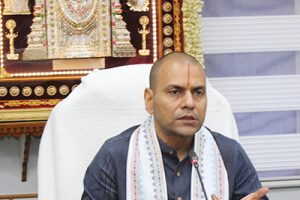 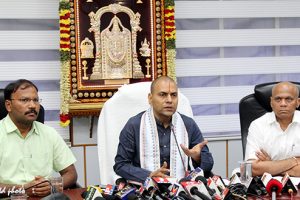 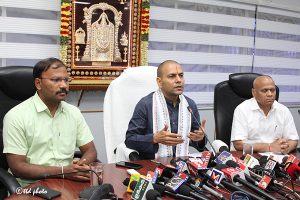