Tirumala, 6 October 2019: As a part of the promotion of Sanatana Haindhava Dharma,  TTD has set up SV Ayurvedic hospital and is providing free medicine to devotees said  Dr. G Padmavathi, the RMO of  SV Ayurvedic Medical college.

Speaking at the media center at Tirumala on Sunday, she said that Ayurveda is considered as an Upaveda of Adharvana Veda.

She said that nearly 6000 devotees received 16 types of Ayurveda medicine worth Rs.3 lakhs and nearly 100  devotees were treated at the special dispensary set up near the Lepakshi center at Tirumala during these seven days of Brahmotsavams so far.

She said the SV Ayurveda college comprising of 14 departments and is serving te devotees for the last 24 years and the Panchakarma medicine is also provided here. 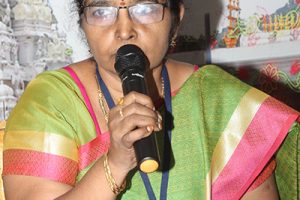