Tirumala, 18 Apr. 21: On the advent of the birth star of Sri Ramanujacharya, Arudra Nakshatra on Sunday, Bhashakarula Sattumora was observed in Tirumala.

Since the great Sri Vaishnavaite Ramanuja has written the foreword to Mimamsa as per norms of Visishtadwaita, he was known as Bhashyakarulavaru.

After Sahasra Deepalankara Seva, the deities accompanied by Sri Ramanujacharya on another Tiruchi taken on a procession along four Mada streets.

Later in the evening, Sattumora was observed at Bhashyakaulavari Sannidhi inside Tirumala temple between 7pm and 9pm.

Both the Senior and Junior pontiffs, Jeeyangars, temple staffs were also present. 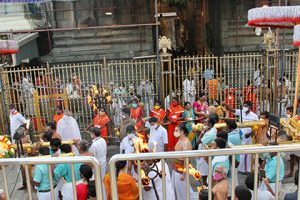