TIRUPATI, 09 OCTOBER 2021:  TTD Chairman Sri YV Subba Reddy on Saturday offered prayers in the temple of Sri Prasanna Venkateswara Swamy in Tirupati and also visited the newly opened Kalyana Katta in the temple premises for the sake of devotees.

Later talking to local media, he said, as many devotees are offering their vows in Appalayagunta Kalyanakatta, the officials have been instructed to increase the number of tonsurers from Sunday on wards.

When the local devotees brought to the notice of Chairman that during Saturdays and Sundays, as the devotees turn up in huge numbers, the serpentine lines are spreading outside the temple premises, forcing them to stand for hours together in queue lines under bright sun. The Chairman assured them that necessary arrangements will be taken to resolve the issue soon.

The Chairman said, the Honourable CM of AP Sri YS Jaganmohan Reddy will be visiting the pilgrim city on October 11 to offer silk vastrams to Srivaru on Garuda Seva day on behalf of state government. He said, he will inaugurate an exclusive children’s’ hospital at BIRRD in Tirupati, the first of its kind in entire AP followed by the opening of Alipiri footpath, Go Mandiram. He will also launch Kannada and Hindi SVBC channels at Tirumala on October 12 along with Karnataka CM Sri Basavaraj Bommai for the sake of global Kannadigas and Hindi speaking devotees and also the newly constructed Boondi Potu, he added.

Earlier he had darshan of Sri Padmavathi Ammavaru at Tiruchanoor. 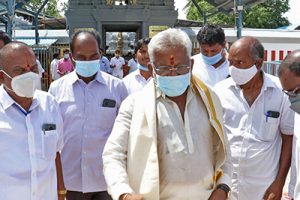 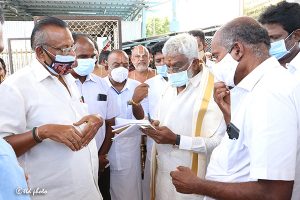 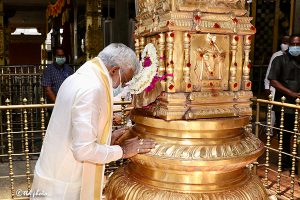 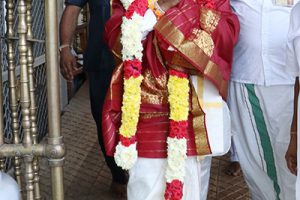