Guruvayurappan Temple, Morgan Ville, New Jersey May  1: For the first time in history, the coveted and divine celestial event of  Srinivasa Kalyanam was performed in the United States of America.

Thousands of   Indians and also Americans clad in festive apparels participated in the ceremony held at the sprawling  Guruvayurappan temple in Morganville,  NJ.

The colourful event was a spectacular feast to the Indians as the wedding of  Lord  Venkateswara to his consorts  Sridevi and Bhudevi was performed amidst  Vedic chanting and rhythm of drums and shenai music.

TTD and its associate  Hindu  Dharma Prachara Parishad have taken a giant step for the benefit of devotees of Lord Venkateswara in the US to perform “SrivariKalyanam” in New Jersey and California.

This is the first event held at the Sri Guruvaayoorappan Temple (Sir Krishnaji Mandir), Morganville, NJ, the business capital of the USA.  Earlier to Kalyanam, the priests from Tirumala will also perform Suprabatha Seva, Archana and Tomala Seva in the early hours for the benefit of the devotees.

These events were open to devotees from all over the US and  Europe.

Situated in a 35-acre property, an authentic temple is being built to house Lord Guruvayoorappan, Lord Balaji, Lord Siva Ekabareswara, Lord Satyanarayana, Lord Ayyappa and other deities.  the proceedings of the celebrations from donors and contributors will be utilised in the temple activity, says  Yajna Subramaniam, the chairman of the Guruvayurappan Temple.

Chief Priest from  Tirumala Sridhar Swamy supervised the rituals performed by his team of five priests.  Dr R Kavita Prasad, the secretary of the Hindu Dharma Prachara Parishad, who also participated in the event said, this was a giant step in the direction of popularisation of Hindu dharma, the task taken up by the TTD.

‘ I am thrilled about the event and it has been conducted exactly as it is done at Tirumala said  Dr Venugopal, one of the devotees from Chicago.

‘ I am lucky to have the darshan of Lord  Venkateswara in San  Jose ( New Jersey)  and  I enjoyed the celebrations which included  Suprabatha Seva, Tomala Seva and also Archana. I was also grateful that I could get the laddu prasadam also aid  Lavanya Krishnamurthy, another devotee, a software engineer at Illinois.

Commenting on the successful conductin of the celebrations the  TANA President and guruvayurappan temple chairman  Yagna  Subramanian said that the event opened up their eyes to the growing popularity of  Srivari Sevas and the need to popularise them and also organise them in large numbers all over the country and abroad.

The second event of Srinivasa Kalyanam and  Sevas of Suprabatha, Tomala and  Archana will be performed at the Sunnyvale Temple, California, says  Dr Kavita Prasad. 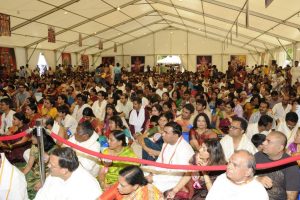 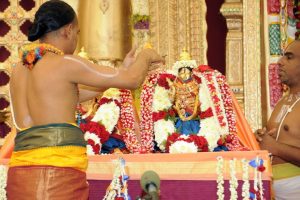 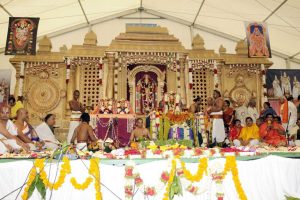