In a representation to the Union Minister at New Delhi, the TTD Chairman said the SV Vedic University, set up in 2006, was recognised by UGC as a State University under 2F category. He said the besides establishing the Vedic University with a noble aim to propagate and preserve Vedic studies for coming generations, TTD has also established Veda Pathashalas and providing financial support to over 80 such Veda Pathashalas across the country. He requested for recognition as 12 B for the 14-year-old institution as a Central University, on the lines of the status given to three other Sanskrit Universities in the country.

The TTD Chairman said the Institution is providing Degree to Doctorate (PG courses) in various segments of Vedic Sciences and will be the first institution of erudite Sanskrit education in the country. The AP government will provide all support for promotion and propagation of Vedas through TTD, he maintained.

In a separate representation, Chairman further requested the Union Minister also to increase the quota in Telugu, Tamil and Sanskrit courses in the TTD managed Sri Venkateswara College at New Delhi. He said the request for hike in quota in institution, for which foundation was laid in 1961 by the then Vice-Present Sri Sarvepalli Radhakrishnan has been pending with the Delhi University since 2016. 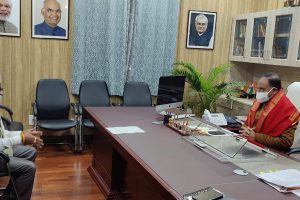