New Delhi, 7 November 2015: The denizens of Delhi have enjoyed evey moment on Saturday with “Vasanthotsavam” that was performed here in the Jawaharlal Nehru Stadium located at Bhishmapitamaha Marg in New Delhi on the penultimate day of Venkateswara Vaibhavotsavams.

The sunny day turned out to be a cool breezy day when the Delhities had a ‘chill-thrill’ experience after they witnessed the aromatic bath that is being rendered to the processional replica deities of Lord Sri Malayappa Swamy flanked by His two beloved consorts Sridevi and Bhudevi on His either sides.

According to the temple Legend, the Vasanthotsavam Festival was started during the period of King Achyutaraya in 1460’s.

This annual fete was believed to have introduced by the King to mark the arrival of Spring Season. Lord and his Consorts are given aromatic bath on these three days which is believed to give a soothing relief to the deities from the scorching Sun.

Vasanthotsavam in Tirumala is being observed as a daily arjitha seva and also annual three-day seva during spring season.

Earlier on Saturday this religious fete began with Punya Vachanam (purification rites), vaasthu santhi (worship of deity and lord of nature and their elements and natural forces as well as lord and deity of directions and environment) and samprokshanam (sprinkling of holy water as a symbolic representation of purification) rituals are performed by the temple priests in Ekantam.

Later the processional deities decorated in “Dhawala Vastrams”(draped in white silk clothes) seated on the Abhishekapeetham rendered aromatic bath with holy ingredients by a team of Archakas and finally the deities were decorated with the sacred “Tulasi Malas” and rendered Harati.

PUSHPAYAGAM ON November 8: The ten day religious programme of Sri Venkateswara Vaibhavotsavams will come to a grand conclusion with Pushpa Yagam which will be performed on Sunday from 9am to 11am in Jawaharlal Nehru Stadium located at Bhishmapitamaha Marg in New Delhi 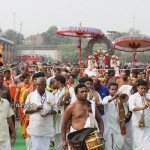