Tirumala, 23 Nov. 19: An amount of Rs.7lakhs including one lakh cash has been paid to Ms.Odemma, the mother of deceased Srivari Sevak Sri Mothe Suman who accidentally died while in service at Tirumala by TTD Chairman Sri YV Subba Reddy.

The Trust Board Chief speaking to media persons in his camp office at Swarna Tirumala Rest House said that it is very unfortunate that the 28-year-old Mother Suman died due to a fatal fall from the second floor of Seva Sadan 2 in Tirumala while he was in Srivari Seva between July 1 to July 4.

“After struggling for life on ventilator at SVIMS super speciality hospital for almost a week, he breathed his last on July 9. We came to know that his economic background is very poor and he is the breadwinner for his family consisting of his ailing mother. The board has decided to do a bit and as a humane gesture we sanctioned an ex-gratia of Rs.5lakhs including Insurance cover while a couple of board members including Smt Prasanthi Reddy and Smt Sudha Narayana Murthy have donated Rs.one lakh each to the mother of deceased volunteer as a token gesture”, he added. 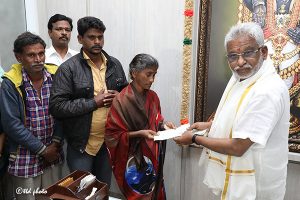 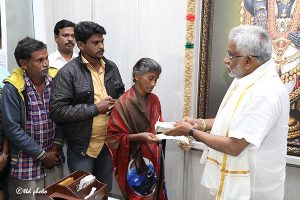