-These are the first two lines from Garuda Shloka which narrates “My salutations to Garuda with the beautiful wings. His limbs adorned by the mighty serpents that he has conquered in battle, which were his jewellery. He does all the intimate kainkaryas to his Master, Lord Sri Maha Vishnu and is His favourite servant. He is adept like the Mandara Mountain”.

Tirumala, 23 Sep. 20: On the fifth day evening, the most important of all vahana sevas during the nine day annual brahmotsavams, the Garuda Vahana Seva took place in Kalyanotsava Mandapam in Ekantam in view of COVID 19 restrictions.

Garuda’s strong position in Hinduism can be estimated by the fact that two ancient Hindu texts, the Garudopanishad and the Garuda Purana, both dedicated to the mighty King of Aves.

The Vedas refer him as Syena, where this mighty Eagle is adored as the one who brought nectar from heaven to earth. Garuda is the Sankarshana energy of the Lord, who is believed to take the manifestation of the omniscient nature of the Lord, during the process of creation. He represents the five vayus that lie within each of us, namely, Prana, Vyana, Udana, Samana and Brahmana and Garuda represent each of these five forms as Satya, Suparna, Garuda, Tarkshya, Vihageshwara respectively. The flapping wings of Garuda are believed to have formed the basis of the Sama Veda.

Lord Sri Malayappa Swamy in His divine splendor seated majestically on His most favourite carrier Garuda Vahana, charmed the devotees who witnessed the fete live through Sri Venkateswara Bhakti Channel, sitting right at their home turfs and enjoyed the vahana seva. 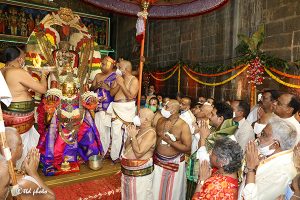 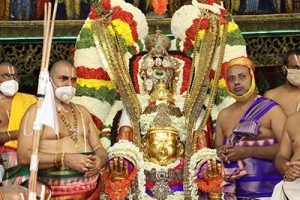 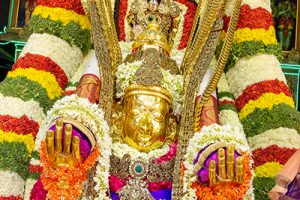