Historic Srinivasa Kalyanam begins in US on May 1

It was mini Tirumala in the US on   Saturday. Thousands of Non-resident Indians thronged the temple complex spread over  33 acres to witness the Suprabatham Seva performed in the United States for the first time in the history of  Tirumala Tirupati Devasthanams.

The TTD  in collaboration with  Guruvayurappan Temple of  Morganville, New Jersey had organized the rituals in the US  in addition to the  Srinivasa Kalyam for the benefit of devotees of Lord Venkateswara.

Hundreds of women dressed in saris and Indian apparel and men in traditional attire participated in the procession of the Utsava Idols prior to the commencement of the sevas at the Guruvayurappan Temple. This was a memorable event in the history of Hindu dharma prachara as the TTD had ventured to take the celestial event of Srinivasa Kalyanam overseas with the support of the local sponsorers.

‘ The rituals and Kalyanam are performed in the US for the first time for the benefit of the people of US so that prosperity and health is showered on them and also a quicker rejuvenation from the ongoing global recession ‘ said  M Anjaiah, member of the TTD board who was also at the venue.

Dr R Kavita Prasad, secretary of the Hindu Dharma Prachara Parishad said that TTD had taken up this noble task in pursuant of its agenda for protection, propagation and preservation of Hindu dharma and traditions. ‘TTD is performing a service to the Hindu society in US and not for any commercial gain’ he said.

Dr Yagna Subramanian President of TANA and also chairman of the Guruvayurappan Temple said the TTD is only a service provider and the donations and contributions gathered as part of the Srinivasa Kalyanam are being used for the promotion of the Temple which was still in the initial phase of construction. ‘This is not an exercise for commercial gain. All the proceeds after the expenses of the event will go to the temple construction fund ‘ he said.

Earlier utsava idols were taken in a procession within the Guruvayurappan Temple to the rhythm of drums and chanting of  ‘ Govinda, Govinda ‘by the entranced devotees. Later the Suprabata Seva, Archana and Tomala Seva were performed at the venue as per the rituals conducted at the Srivari temple in Tirumala. ‘The devotees were thrilled over the divine event as many could not visit Tirumala for darshan of Lord Venkateswara every year ‘said Ram Mohan Vedantam.

The celestial event of Srinivasa Kalyanam was also performed at 10.30  AM  American Time (8.30 PM IST) by the chief priest Sridhar Swamy with help of five Pother priests from Tirumala. Others officials from Tirumala C.Ramana, OSD,  Muralikrishna, DyEO, Upendra  Reddy, DEO,  Venugopal, PS  to EO, Dr R.Kavita Prasad were among those who facilitated the events at  Morganville this morning. 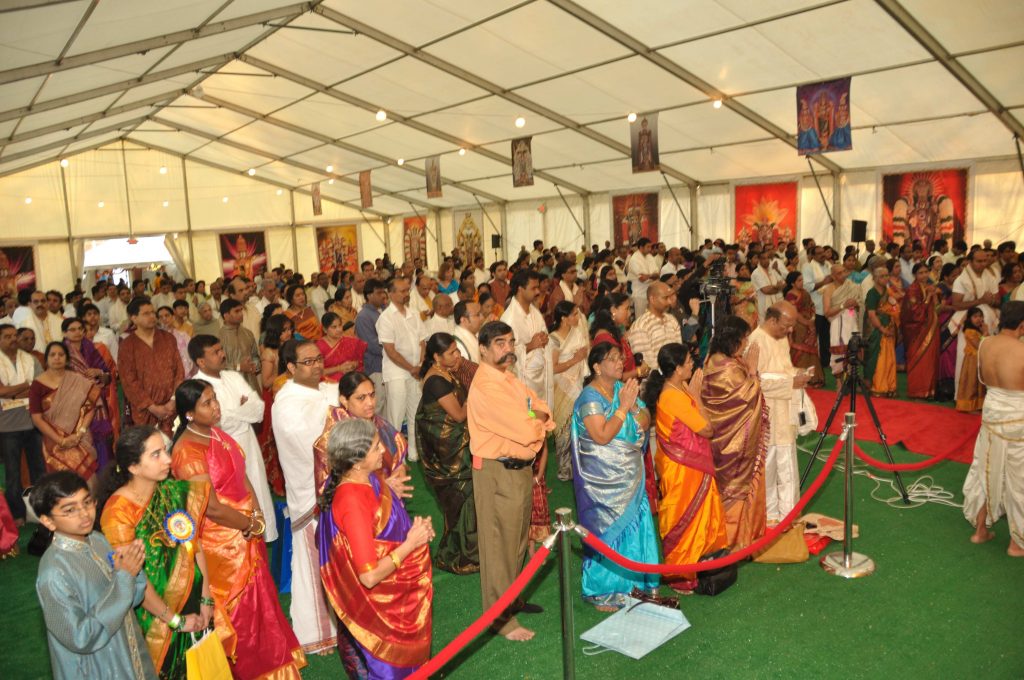 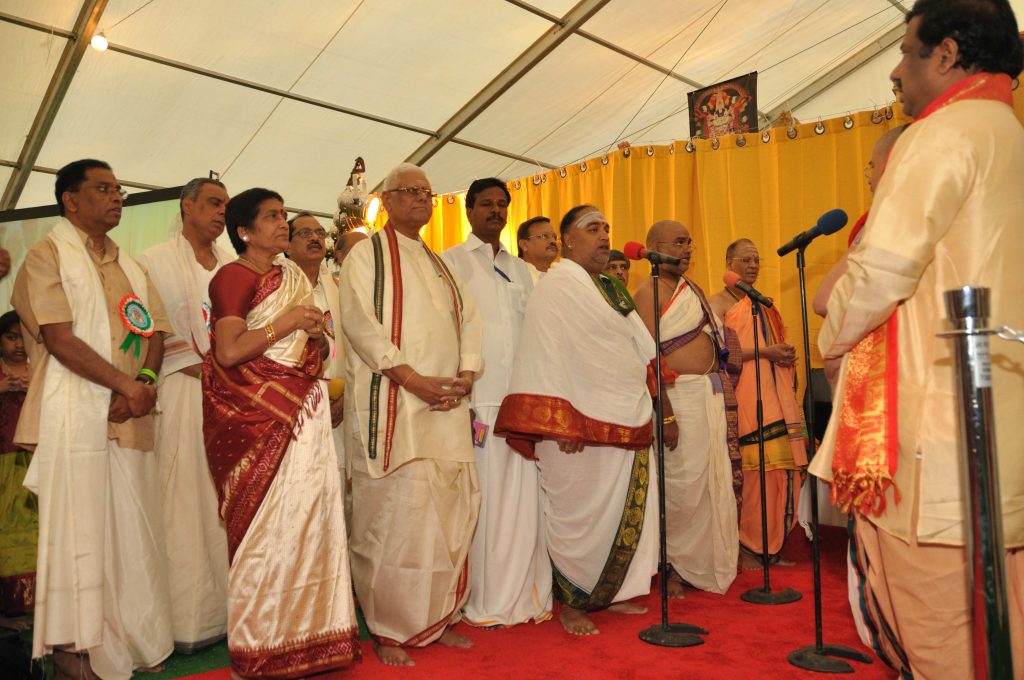 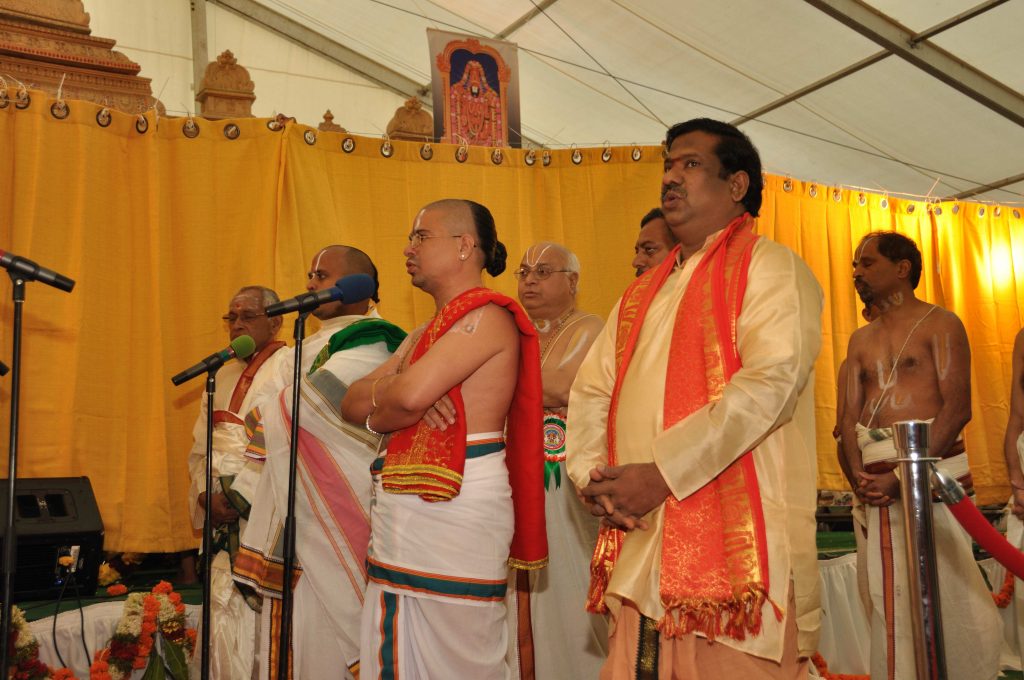 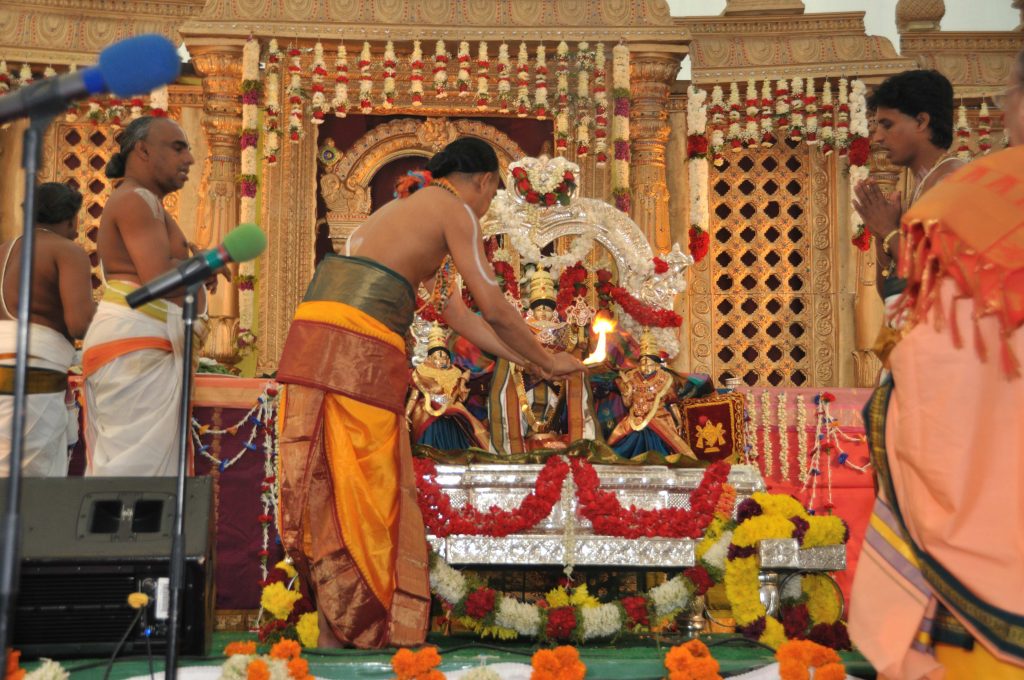