TIRUMALA, 06 OCTOBER 2021: As the annual brahmotsavams of Sri Venkateswara Swamy at Tirumala are scheduled from October 7 with Ankurarpanam on October 6, TTD Chairman Sri YV Subba Reddy along with EO Dr KS Jawahar Reddy highlighted the arrangements.

The media briefing took place at Annamaiah Bhavan in Tirumala on Wednesday. Speaking on the occasion, the Chairman said, though TTD thought of organizing annual fete in a big manner, the threat of possible third wave of Covid 19 alarmed by Central and State governments forced them to conduct the mega religious festival in Ekantam this year also. However, TTD will live telecast all the events, vahana sevas for the sake of global devotees in SVBC. Excerpts:

Morning Vahana Sevas: Between 9am and 10am

No Swarna Ratham and Wooden Chariot due to Ekantam. Instead Sarva
Bhupala Vahana Seva takes place

All rituals during Brahmotsavams as per Agamas as usual.

SVBC clean feed of Brahmotsavam rituals in all other channels

Further briefing the media on the two-day visit of Honourable Chief Minister of Andhra Pradesh Sri YS Jagan Mohan Reddy on October 11 and 12, the Chairman said the Honourable CM will offer silk vastrams on behalf of state government on Garuda Seva day on October 11. Earlier, he will also inaugurate Paediatric Cardiac Hospital which is setup at BIRRD exclusively for children with heart ailments. “The Saptha Go Pradakshina Mandiram built at a cost of Rs.15crore by a Chennai based donor and the renovated Alipiri Footpath at Rs.25crore by Reliance Industries will also be opened by the Honourable CM”, he maintained.

On October 12, the Honourable CM will launch Hindi and Kannada SVBC channels. While the Kannada SVBC he will launch along with his Karnataka counterpart Sri Basavaraj Bommai at Tirumala. Later the new Boondi Complex constructed by India Cements on donation basis at Rs.12crore will also be opened on the occasion, he added.

The Chairman said, TTD will be providing free Srivari Brahmotsavam Darshan to devotees hailing from backward classes where TTD has built Srivari temples devotees across the state from October 7 to 14.

Later speaking to media, TTD EO said, in the place of Swarna Ratham on October 12 and Wooden Chariot on October 14, Sarvabhoopala Vahanam will be observed. As per the suggestion of Agama Advisors, the Chakrasnanam which will be observed on the last day of annual brahmotsavam on October 15 will be observed at Aina Mahal. He said two dosages of vaccination report or Covid negative test report are must for the devotees along with their darshan tickets while coming to Tirumala.

The Additional EO Sri AV Dharma Reddy briefed media on the department-wise arrangements during annual brahmotsavams. He also said programmes like Adiparvam, Venkatachala Mahatyam, Vahana Vaisistyam are planned during the annual fete which will be telecasted live on SVBC. 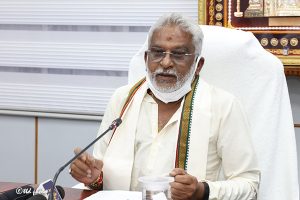 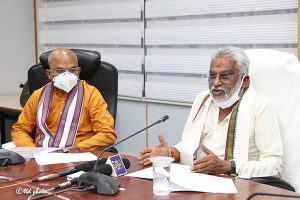 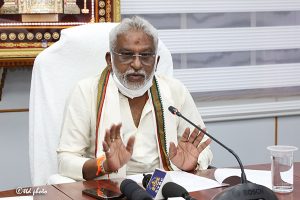