A review meeting was held in the Officers’ Accommodation Hall at Vontimitta in YSR Kadapa district on Monday. After the inspection, the JEO held a review with all the department heads over the arrangements to be made for the ensuing mega festival which is scheduled from April 9-19 with a special focus on the state festival of Sri Sita Rama Kalyanam on April 15.

He said the annual brahmotsavams will be observed between April 10 to 18 with Ankurarpanam on April 9. On April 19 Pushpa Yagam will be observed. In view of the participation of huge number of state dignitaries for Sri Sita Rama Kalyanam on April 15, elaborate security arrangements are to be made in coordination with the local police.

He instructed the Additional Health Officer Dr Sunil to ensure that sanitary measures are taken care of both inside and outside the temple, near Kalyana Vedika etc.

The JEO directed the VGO Sri Manohar to co-ordinate with the local police over the security arrangements, traffic regulations, passes to distributed etc. to be made for the annual fete.

Later he instructed SE Electrical Sri Venkateswarulu to erect more number of LED screens for the sake of large number of devotees who are expected to converge on the day of Kalyanam. He also directed EE Smt Sumati to ensure that all the engineering works to be attended to and completed on time without any delay.

The JEO also discussed on Srivari Seva, greenery enhancement measures, cultural events to be performed, SVBC live, Annaprasadam and buttermilk, water distribution, Prasadam distribution etc.with the concerned officers and asked them to prepare a checklist of the respective departments. 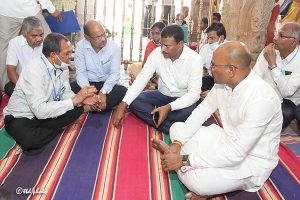 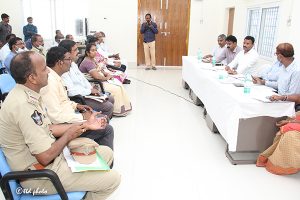