Tirumala, 21 Nov. 20: The colourful festival of flowers, Pushpa Yagam was organised at Srivari temple on Saturday on the occasion of Shravana nakshatra during the auspicious month of Karthika.

Earlier, in the morning, after second Archana and second bell, Naivedyam, Snapana Tirumanjanam was performed at Kalyana Mandapam. The special Abhisekam is performed to utsava idols with milk, curd, honey, sandal, turmeric and scented perfumed waters.

Later the Additional EO Sri AV Dharma Reddy attended the puja performed to these flowers at Garden office. Speaking to media on this occasion, he said inscriptions say that the festival was celebrated in Srivari temple since 15th century to usher in greenery and prosperity in the country. The legends also say that Pushpa yagam is generally conducted on the seventh day after Dwajavarohanam of Brahmotsavam festival. He said TTD resumed Pushpa yagam mahotsavam in 1980, on November 14.

The flowers were carried to Srivari temple in a colourful procession from the Garden Department by staff and srivari sevaks.

Thereafter in the afternoon, Pushpa Yagam is performed between 1.00 pm and 5.00 pm with seven tons of 14 varieties of traditional and cut flowers like rose, Jasmine, Kanakambaram, Lillies, Ixora, ganneru, chrysanthemum and six other varieties of scented leaves. 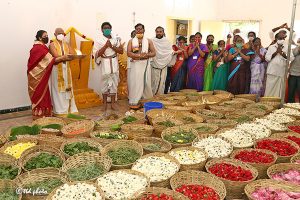 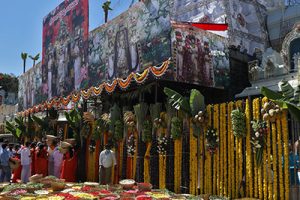 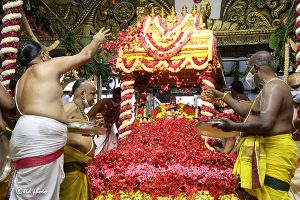