His announcement came during his participation as Chief Guest at the oath-taking ceremony of Sri Sekhar Reddy as Chairman of Local Advisory Committee of TTD at the TTD information centre in T.Nagar at Chennai on Monday.

Speaking on the occasion the TTD Chairman lauded Sri Sekhar Reddy as an ardent devotee of Sri Venkateswara and his contributions to the Hindu dharma propagation.

He said within a year before the commencement of the holy Peritasi pilgrimage of Tamil devotees who come on foot to Tirumala, resting shelters shall be built along the route for their benefit.

He said TTD is also mulling to conduct the Kumbhabhishekam of the Sri Padmavati temple which is under construction at Chennai within one year.

He said the Tamilnadu government has also agreed to give land in OMR, ECR regions towards the construction of Srivari temple at Chennai on the lines of Tirumala temple.

“The TTD engineers will scrutinise the lands at both locations and decide on a suitable plot for Srivari temple and Bhumi puja will be performed and temple construction activity will commence”, he said.

The TTD Chairman also said TTD is planning to build a Kalyana Mandapam in a two acre land at Royapettah for the benefit of lower middle class families.

Speaking on the occasion Sri Sekhar Reddy said with Srivari blessings he had taken up the construction of Go Mandir at Alipiri where Go Thulabharam, the first of its kind in the country is also set up. 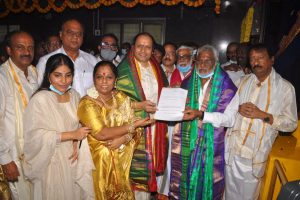 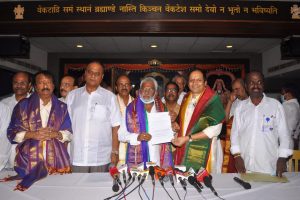 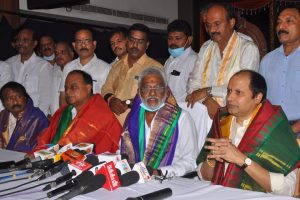