Tirumala, 17 Sep. 20: The procession of Darbha mat and rope which are used during the Dhwajorahanam ceremony during annual brahmotsavams was held in Tirumala on Thursday evening.

The annual brahmotsavams commences with the traditional Dhwajarohanam fete where this sacred “Darbha”, scientifically known as Desmotachya bipinnata, is a tropical grass, which is considered most pious in Vedic scriptures.

The mat and rope made of this holy grass are tied to the temple pillar and pujas are performed as per the tenets of Vaikhanasa Agama amidst the chanting of Vedic Mantras unfurling the Garuda flag atop the Dhwajasthambham heralding the beginning of annual brahmotsavams.

According to the DFO TTD Sri Chandra Sekhar, who after performing pujas to the sacred material, speaking to media said, the legends say that there are two types of Darbhas  – Shiva Darbha and Vishnu Darbha. In Srivari temple Vishnu Darbha is collected from Chellur near the Vadamalapeta region of the Chittoor district are used. After drying it in sun rays for a week, a 7×2 meters mat and 212 feet rope is readied for the holy Dhwajarohanam event by our staff who worked for 16 days and nights with utmost devotion”, he added.

Meanwhile, the Darbha mat and rope were handed over to Temple DyEO Sri Harindranath at Srivari temple and placed atop the Seshavahnama located in Ranganayakula Mandapam. 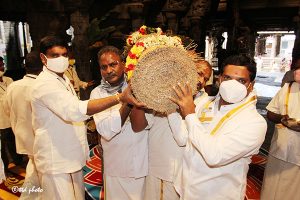 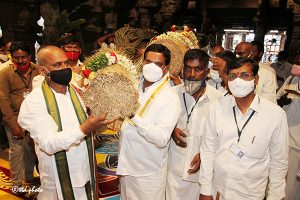 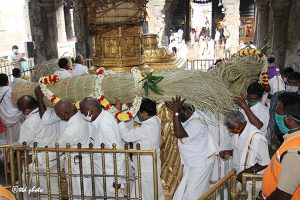 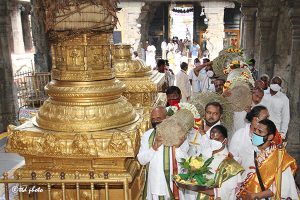 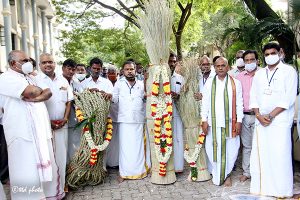