Tirumala, 19 Feb. 21: After a hectic day in the first half, the second half commenced with Chakrasnanam as a part of Radhaspathami festivities in Tirumala.

The Sudarshana Chakrattalwar was brought to Swamy Pushkarini in a procession on a palanquin. The Archakas performed holy snapanam and immersed the serrated sacred weapon in the Pushkarini waters. As the Central and State government Covid restrictions are yet to be relaxed on water bodies, the holy event is observed in Ekantam.

Hindu mythology says that the Kalpavruksha has divine powers on par with Kamadhenu and Chintamani. All these three are known for granting boons. Srimad Bhagavatham says that all those who took shelter under Kalpavruksha became prosperous. By taking a celestial ride on the Kalpavriksha Vahana along with His two consorts Sridevi and Bhudevi Lord sent a message to His devotees that He is there to fulfill their genuine wishes.

Sarva Bhoopala meaning the Supreme Lord of Lords. Lord Venkateswara is the Supreme commander and even the Astadikpalas, Panchabhootas and other devaganas discharge their respective duties under His instructions. Lord Malayappa took a celestial ride on this finely decked carrier with His consorts to bless devotees.

The Sapta Vahana Seva of Lord concluded with Chandraprabha Vahanam on the fine evening of Friday.

Legends say that Chandra or the moon stands for highlighting medicinal values in all living beings including plants. Chandra is described as Lord Vishnu, the invisible architect who found remedies for all ailments of persons and plants.

The Bhagavat Geeta also mentions “Nakshatrana Aham Shashi” (I am the moon in the constellation) as the Lord referred Himself to the Moon. The Chandra Prabha Vahanam signifies that its very sight will provide soothing relief to devotees from physical and mental worries 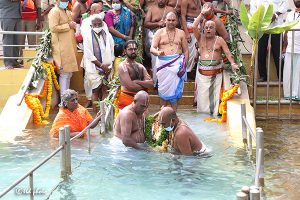 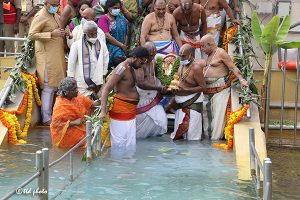 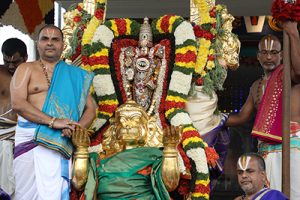 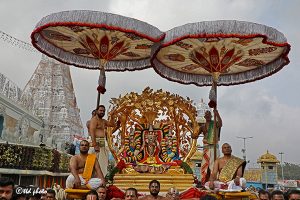 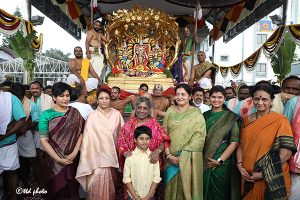 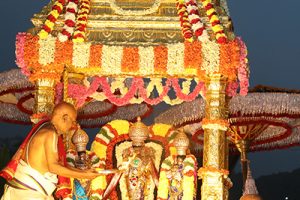