Tirumala, 12 March, 2010: The 506th Vardhanthi, death anniversary, of the saint poet, Annamacharya, got off to an ecstatic start in the picturesque Narayanagiri gardens on the Tirumala hills. Sri E.S.L.Narasimhan,His Excellency Governor of Andhra Pradesh attended the programme as the chief Guest. The highlight of the festival was a Nama Sankirthanam in which nearly 3000 artistes from AP, Tamilnadu and Karnataka participated and led the processional deities of Lord Venkateswara and His two Consorts to the venue, singing in chorus the select compositions of Annamacharya all the way to the sprawling lawns.

In the presence of 45th Pontiff of Sri Ahobila Mutt, Sri Narayana Yatheendra Mahadesikan, at the programme at the invitation of the TTD in line with a well-meaning tradition introduced by its management in the recent years. The tradition was introduced in order to perpetuate the age-old association between the two great vaishnavite temples of Tirumala and Ahobilam and also as a gesture of honour to the founder of the Ahobila Mutt at whose hands the saint-poet Annamacharya got himself initiated into Vaishnavism before he took upon himself the stupendous task of composing no fewer than 32,000 songs in praise of the Lord Venkateswara.

Speaking on the occasion, Sri D.K.Audikesavulu, Chairman’s TTDs said that Annamacharya is not only a devotee but also he spreaded the message and vaibhavam of the lord to the people. 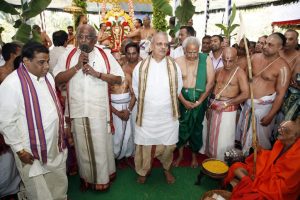 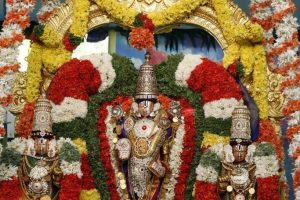 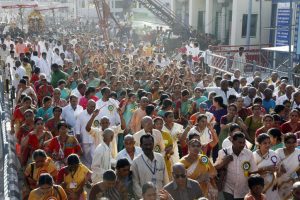 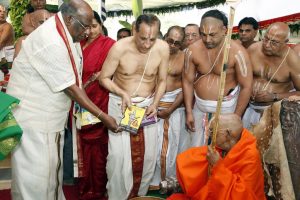 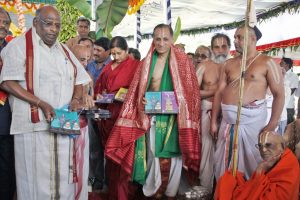 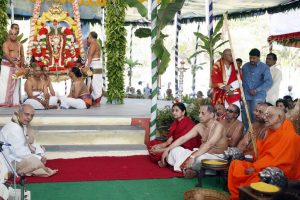 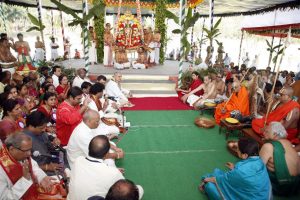