Tirumala, 6 Sep 2020: The conduction of annual Brahmotsavams of Lord Venkateswara at Tirumala in Ekantam was as per the wish of the Supreme Lord Himself, said HH Sri Swaroopanandendra Saraswathi Swamy of Visakha Sarada Peetham.

TTD Chairman Sri Y V Subba Reddy along with EO Sri Anil Kumar Singhal and Additional EO Sri A V Dharma Reddy called on the pontiff at his ashram in Rishikesh on Sunday. The Visakha pontiff has been performing Chaturmasa Diksha along with Junior Pontiff Sri Swatmanadendra Saraswathi Swamy since last three months.

The TTD officials presented Srivari Thirtha Prasadams to the Pontiff on the occasion of their courtesy call and received blessings from him.

Speaking on the occasion the Pontiff lauded the COVID-19 prevention and precautionary steps taken up by the TTD at Tirumala providing convenient and hassle-free darshan to pilgrims.

He also complemented TTD for its spiritual and religious programs like Sundarakanda and Viratparva Parayanams which have received global applause during the pandemic period.

The Pontiff also admired the stellar services provided by the religious staff and other employees of TTD to the pilgrims when darshan resumed. 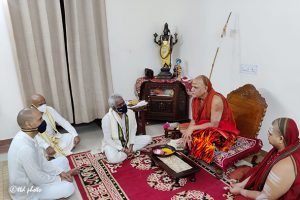