Tirupati, 23 August 2016: The Sri Venkateswara Go Samrakshana shala has been decked up with flowers and decorations for the Gokulasthami festival slated for August 25. Besides Go Puja, several cultural activities were also lined up by TTD to highlight the significance of the sanatana Hindu festival.

Pendals, mango leave decorations, flower garlands and also lightings mark the day at the SV Go Samrakshana shala. A special feature of this years festival is that fodder and green grass is made available for feeding the animals in the Gow Shala.

As Per sanatana Hindu dharma Cow is considered very sacred and hailed as Go Mata and worshipped as a goddess. Offering feed of grass to such holy cow is considered as a blessing for devotees.

TTD has lined up series of activities for Gokulasthami day from morning 5am onwards which begin with Abhisekham for Sri Venugopalaswami, then Venuganam, bhajans and Kolatalu by Dasa sahitya project artistes.

There will be grand Go Puja at 10.30 AM and darshan of Sri Venugopalaswami will continue till 12.00 noon and later prasadam. Later in the evening harikatha program will be conducted by the HIndu dharma prachara parishad. 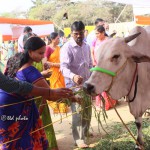