Tirupati 11 Feb. 17: The country’s first devotional channel in public sector, Sri Venkateswara Bhakti Channel has rolled out a bevy of new bhakti music devotional programs, that enhance the devotional and spiritual activity in the society.

Sri AV Narasimha Rao, CEO of SVBC said “Pujaku Velaye” Telugu program beamed daily at 8.30 AM highlighting the significance of daily prayers and puja amidst the hurry and bury of daily activity would commence from February 11. The program showcased on prayers and puja vidhanam (ritual process) of worshipping various Gods and Goddesses. The daily quotient of devotion would help the pious to withstand the daily rigours of life’ he said.

He said from February 13, SVBC would telecast at 9.30AM ‘Bhakti Gita Malika”, a program of cascading devotional flavour chosen from various formats to benefit the devotees daily
On the same day “Bhakti Chaitanyam’ program is also being launched at 8.00PM at night showcasing the culture and epic history of Bhakti cult through ages in a phased manner.

From Februar 16, on every Thursday at 8.00 PM the SVBC will broadcast ‘Nenu… Na Swami (Me and My lord) where prominent pontiffs, sages and prominent personalities would share their Bhakti experiences for public benefit.

Sri Narasimha Rao said that the daily special programs already broadcast since January 16- Suprabhata Vaibhavam (5.30AM-6.30AM) and Srivari Sevalu ( 7.30AM-8.00 AM) had received applauds and kudos by devotees of Lord Venkateswara from all over the world. 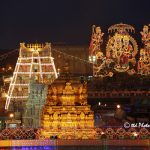