The Additional EO of TTD Sri AV Dharma Reddy administered the oath of office with the EO at Bangaru Vakili at 10:05am in front of Sri Venkateswara Swamy.

After the darshan of Srivaru, the EO was rendered Vedasirvachanam at Ranganayakula Mandapam. Later he was presented with Theertha Prasadams, a lamination photo and a Coffee Table book of Sri Venkateswara Swamy.

Later, speaking to the media persons outside the temple, the EO said, as the annual brahmotsavams at Tirumala temple are scheduled from October 7 to 15, the arrangements for the same are underway. “In view of Covid pandemic, the annual fete will take place in Ekantam. The Honourable Chief Minister Sri YS Jaganmohan Reddy will be invited for the mega festival”, he maintained.

The EO said, TTD, as declared earlier, will develop the Hanuman Janmasthalam in Anjanadri. “To popularise the new Sankeertans of Tallapaka Sri Annamacharya which were brought to light byTTD, the competitions to the youth will be held across AP in October. To start with from the youth of Chittoor district on October 24 and 25 which will be recorded in SVBC studio at Tirupati”, he maintained.

Later, the EO along with Additional EO and CVSO inspected the Brahmotsavam arrangements in Tirumala on Friday.

As a part of it, he inspected the entry and exit lines near the temple, sanitation, electrical illumination arrangements and ongoing civil works. He later directed the officials concerned to complete the same as per the time schedule. 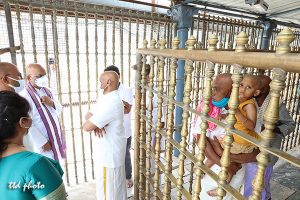 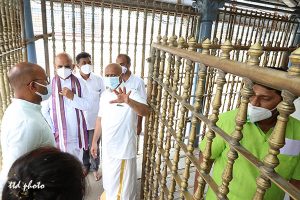 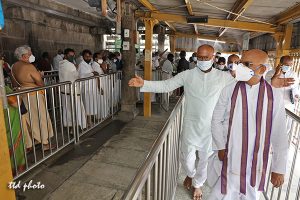 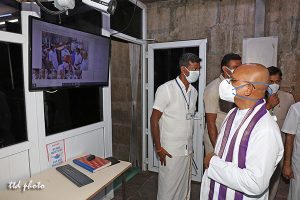 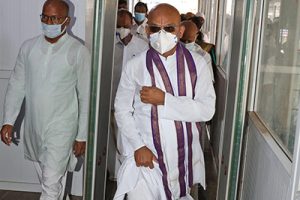 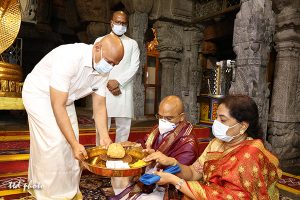 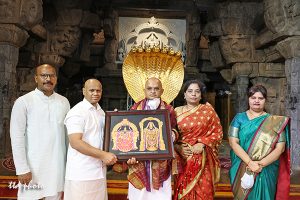