Tirumala, 28 Feb. 20: The Chairman of TTD Trust Board Sri YV Subba Reddy asserted that the TTD will take up extensive campaign of Hindu Sanatana Dharma in villages of AP and Telangana in collaboration with the Samarasata Seva Foundation.

Addressing Executive Committee Meeting of Hindu Dharma Prachara Parishad (HDPP) at Annamaiah Bhavan on Friday he said that 15 villages in each of 360 mandals of both states would be taken up for distribution of Sri Venkateswara Swamy photos, kankanams, stickers and other dharmic material on a door to door basis.

He said TTD will supply pustaka Prasadam of 531 sets of 75 books worth Rs 3020 to the Bala Vikas kendras run by the Seva foundation.

As a part of campaign, TTD has plans to sanction Rs 10 lakh to build each Srivari temples in SC, ST and fishermen colonies.

He said Rs 10 lakhs has been approved for conducting Hindu Atma Gowrava Yatra and Geeta Yajnam on April 11 under the aegis of Hindu Dharmika Seva Samiti in entire AP.

TTD is also providing a financial assistance of Rs 25 lakhs for conduction of Tatayyagunta Gangamma Jatara in Tirupati, the folk Goddess festival, who is revered as the sister of Lord Venkateswara. TTD engineering department has been directed to take up beautification of Tirupati roads for the ensuing Jatara.

Later the TTD chairman also reviewed the development works of BIRRD and SVBC. 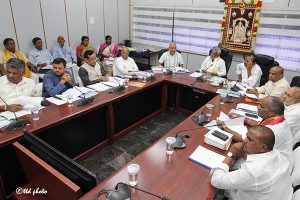 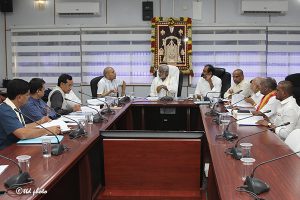 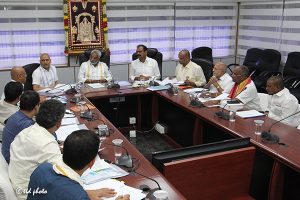 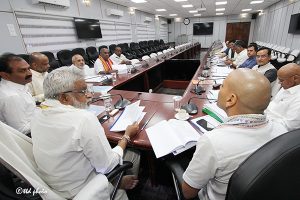