TTD PUBLICATIONS WING TO RELEASE 14 SPIRITUAL BOOKS AT A TIME

Tirumala, 1 Oct. 19: As a part of its effort to propagate Hindu Sanatana Dharma, the Publications wing of TTD is all set to release 14 Spiritual books penned by scholars during Hamsa Vahanam as a part of the ongoing annual brahmotsavams on Tuesday.

He said the Publications wing of TTD has published one lakh slokas of Mahabharata in Devanagiri and Telugu with the support of Rashtriya Sanskrit Vidyapeetham in Tirupati. All publications of TTD are uploaded in the website. While some 104 literary works have been sent to noted libraries across the state. 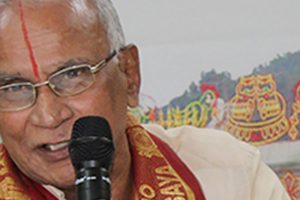