BOTH FOOT PATHS CLOSED ON MARCH 19 ITSELF

TTD TAKES IMMEDIATE PRECAUTIONS UNDER THE INSTRUCTIONS OF GOVERNMENT

Tirumala, 19 March 2020: In view of containing the widely spreading COVID-19 virus, TTD has decided to stall Srivari darshan with effect from March 20th from 12 noon onwards for pilgrims. However all the daily Kainkaryams will be performed to the main deity by Archakas as usual, said TTD EO Sri Anil Kumar Singhal.

TTD decision to stop Srivari darshan is for a period of seven days for now is under the directives from State Government in view of a COVID 19 suspect who visited Tirumala on March 18.

He said TTD board chairman will review all decisions depending on fresh guidelines from State and central Governments after seven days.

Temporarily other TTD local temples like Sri Padmavati Ammavari Temple at Tiruchanoor, Sri Govinda Raja Swamy Temple and others also will be closed. Even the Brahmotsavams in Sri Kodandarama Swamy temple at Tirupati will be conducted in side in a low profile. While we have already cancelled mass Sita Rama Kalyanam at Vontimitta on April 7, he mentioned.

Elaborating on the COVID 19 suspected case, Sri Daya Shankar, 65 years of age from Mirzapur in Uttar Pradesh in a team of 110 had pilgrimage visiting Triveni Sagam at Allahabad, Kolkata, Puri Jagannath, and Srisailam and reached Tirumala on March 18 and stayed in Madhava Nilayam.

The patient is suffering from Chronic Obstructive Pulmonary Disease (COPD) from the past two decades.  He, along with his group, are now kept in Isolation Ward for treatment. Exact reports about his health condition will be come to us soon, EO said.

As a matter of precautionary measure, both the foot paths at Alipiri and Srivari Mettu were shut down from today itself by 3pm onwards and devotees with time slot tokens alone permitted to walk up Tirumala. The EO said on March 19 a total of 42, 957 time slot tokens were issued to pilgrims and they will be provided darshan by the end of the day.

Adding further he said all Reception counters, Kalyanakatta, Anna Prasadam Complex, Laddu Complex are set to close down from 12 noon of March 20.

To a query he said, there were a few instances when similar incidences took place in temple history. Citing 1892 incident, he said, during that time was completely closed for two days.

The EO appealed to devotees to bear with this inconvenience and urged them co operate with the decisions of TTD. 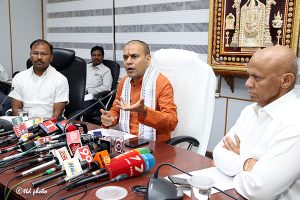 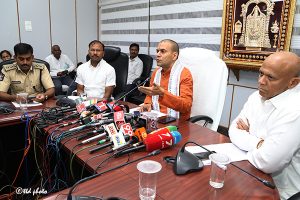 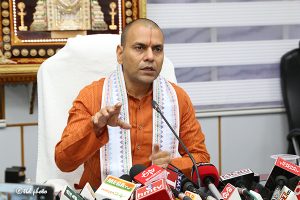 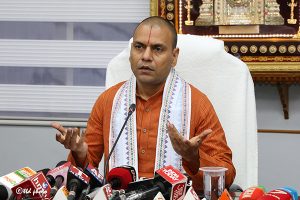