BOARD TAKES IMPORTANT RESOLUTIONS IN ITS LAST MEET

Tirumala, 19 Jun. 21: The TTD Trust Board under the Chairmanship of Sri YV Subba Reddy has resolved some important decisions for the benefit of the pilgrims, employees and public in general during its final meeting held at Annamaiah Bhavan in Tirumala on Saturday.

Before briefing the resolutions to media, the TTD Board Chief thanked Honourable CM of Andhra Pradesh Sri YS Jagan Mohan Reddy, all the members of the Trust Board, TTD authorities, officials, employees and everyone for extending support to the Board in executive some innovative and important works for the benefit of the pilgrims. He said though, the Board has to face a hard time due to the Corona pandemic almost from the past one and a half years, with the support from TTD officials and pilgrim public many development works were taken up.

Some excerpts from the meeting:

Ø  Priority to common pilgrims was given curbing the categories of L1, L2 and L3 in VIP Break Darshan System

Ø  To weed off the ill effects of the Corona Covid 19 virus pandemic, TTD has taken up several Spiritual programmes in the last 14 months in the Nada Neerajanam platform at Tirumala by telecasting live on SVBC which boosted confidence among world devotees.

Ø  Though the board thought of completing the construction of 500 temples with the help of Samarsata Foundation and Endowments department in the last two years, due to lockdown works were not taken up. However, these works will be completed in the next one year in Dalitwada, Agency and fishermen areas.

Ø  The construction of the Srivari temple was taken up at many important areas to spread the glory of Srivaru. As a part of this sacred mission, the Board has also resolved to construct a temple at the Himalayas and hence did the foundation stone ceremony at Majhin village area in Jammu on June 13. The Srivari temple works will be completed here in the next one and a half years.

Ø  Once the things turns to normalcy, TTD is also contemplating to construct Srivari temples in Varanasi and Mumbai in the span of the next one year.

Ø  A unique programme, the Govinduniki Go Adharita Naivedyam programme will be taken up in a full-fledged manner. In this programme, the daily Naivedyam for Swami Varu will be prepared out of organic cereals and ingredients used for making holy prasadam.

Ø  Honourable CM of AP will be invited to lay the foundation stone for Paediatric Hospital in Tirupati.

Ø  Nod to construct 13 Kalyana Mandapams in the viable areas

Ø  TTD to develop Hanuman Birth Place at Anjanadri in Tirumala 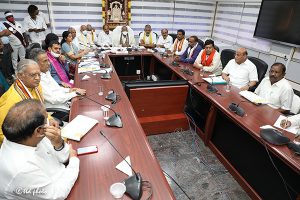 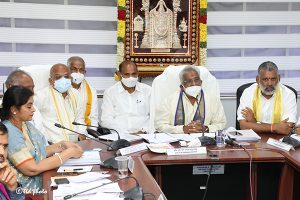 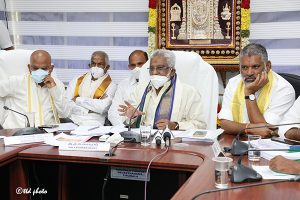 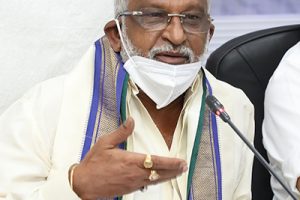 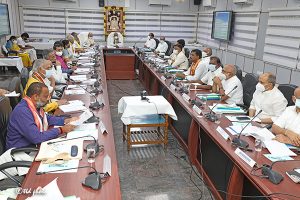 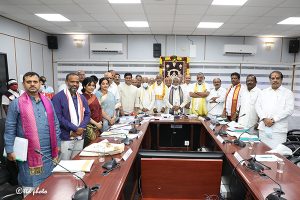 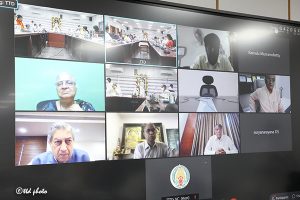