Tirumala, 9 Nov. 19: The idol of Sri Ugra Srinivasa Murthy also known as Venkatatturaivar was taken on a celestial ride along the four mada streets on the auspicious day of Kaisika Dwadasi on Saturday.

Religious fervour marked the celebration of the annual ‘Kaisika Dwadasi’ at the hill shrine of Lord Venkateswara as the devotees were mused with devotion to see the procession of Sri Ugra Srinivasa along with Sridevi and Bhudevi which takes place only on this day in a year. The procession is carried out before the break of dawn between 4.30am and 5.30am.

Immense importance is attached to the festival, which according to mythology is revered as one of the most important religious events in the Sri Vaishnava Kshetrams. Legends say that Kaisika Ekadasi arises out of Kaisikapuranam consisting of 82 slokas, which a story is told by Sri Varaha Perumal to Bhoodevi.

Based on the story of an ardent devotee Sri Nambaduvan, Kaisika Dwadasi attained religious significance.

A great devotee of Lord Sri Nambaduvan(also known as Satyamurthi) being confronted by a Brahma Rakshasa on his way to Nambi temple. This Rakshasa used to be a Brahmin by the name of Soma-Sharma. He committed some grave mistakes during a Yagam and was cursed to become a Brahma Rakshasa.

On Kaisika Ekadasi day, when Nambaduvan was traveling to the temple, a demon stops him to become his prey. After great persuasion, Nambaduvan tells the Rakshasa that he would return to be eaten by him after completing his annual offering of music to Nambi Perumal. The Rakshasa allows him to proceed to the temple. After singing songs in Kaisika Ragam, all night in front of the Lord, Nambaduvan comes back to Rakshasa to fulfill his promise.

At that time, Lord Sri Mahavishnu, to testify the devotion and commitment of Nambaduvan, in the guise of an old man, stops him and asks him to take another route, to escape from becoming prey to the demon. Nambaduvan refuses to break his promise and proceeds to meet his death. The Demon was surprised at his honesty when he sees Nambaduvan coming to him. Later the truthfulness of Nambaduvan impresses Lord who offers him salvation also breaks the curse of Demon.

In Tirumala, only on this day, Sri Venkatatturaivar, is taken out of the temple on a procession and that too before sun rise.  The reason is that in the 14thCentury, there was huge fire accident in Tirumala when there was a procession of Sri Ugra Srinivasa Murthy as soon as the sun rays fell on the idol. Since then the procession is being observed before the sun rise followed by Asthanam.

Later, the priests organised Dwadasi Asthanam to the deities inside the temple. The temple priests read out the story from Kaisika Puranam during the temple court organized at Bangaru Vakili. 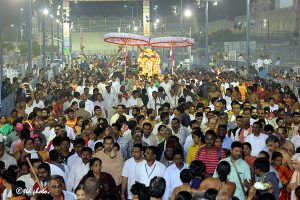 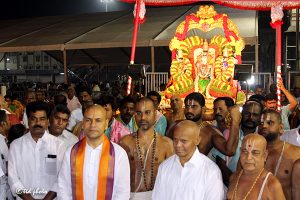 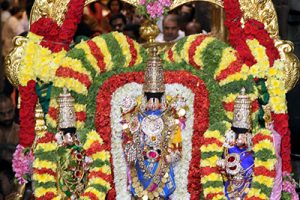 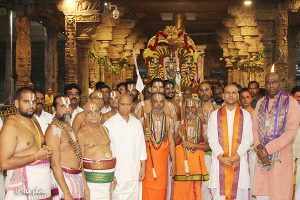 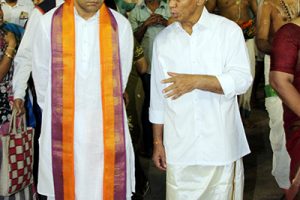 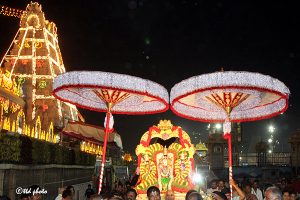 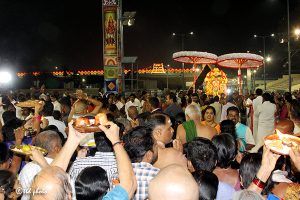 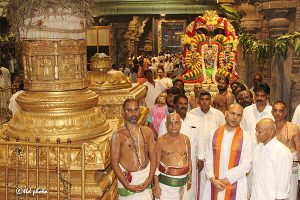