As a part of the orientation programme to Srivari Sevakulu in view of Radhasapthami on Friday, at Asthana Mandapam a programme by the whistle wizard has been organised. Sri Siva Prasad has presented some noteworthy songs of Annamacharya which included Kondalalo nelakonna…, Tandanana Aahi…, Pidikita Talambrala…, Narayanate Namo, Vedukundama… and bhajans Sarvatra Govinda Nama Sankeertana…, Govinda Krishna Jai…to rhythmic accompaniment of Sri Bharadwaj on Keyboard, Sri Manjunath on Tabla, OSD Sri Phanirangasai on Mridangam.

Both the TTD EO Sri Anil Kumar Singhal and Additional EO Sri AV Dharma Reddy complimented and thanked the maestro of whistle music which is a unique art who mused the huge gathering with his matchless skills. EO and Additional EO later felicitated the versatile artist who charmed with his talent for over an hour.

Sri Siva Prasad who is now 65 years old, is a disciple of Carnatic music legend late Dr M Balamuralikrishna. He has given over 11,000 concerts world wide and was felicitated with many titles including Human Flute, Swasa Nada Brahma and many more. 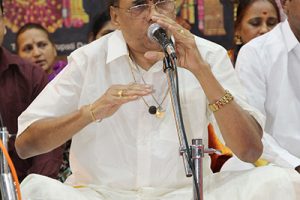 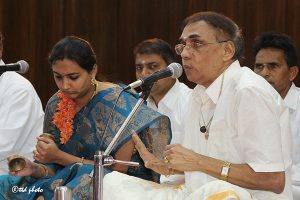