·  All liqour and meat shops in Trichanoor to be shut down for Festival
·  Special arrangements for Anna Danam and Panchami Teertham day
·  Co-ordination with RTC for more buses
·  Special electrification and signage boards for the benefit of devotees
Tirupati, August 30:  The TTD EO Sri LV Subramanyam on Thursday reviewed with all department HODs over the arrangements for the nine-day Karthika Brahmotsavams which is scheduled to take place from November 10th to November 18.
TTD EO has directed the officials to gear up for the mega annual event of Sri Padmavathi Ammavari Temple. Some excerpts of the review meeting:
All liquor and meat shops in the temple premises will be shut during the Brahmotsavams.
TTD officials and all department officials should work in co-ordination.
The stream lining of traffic in four-mada streets will become operational with immediate effect.
Special arrangements for plying of buses, parking signage boards, electrification of daily processions, barricading, drinking water, sanitation and bando-bust of devotees should be made with support of RTC, police, engineering and electrical wings of the TTD.
Special outlets should be set up for the distribution of Anna Prasadam along with barricading for the Panchami Theertham to be made in coordination with all Government departments.
Flower show, Ayurvedic expo,  to be organised.
Among those who participated in the review meeting were  Sri K S Srinivas Raju,(JEO-Tirumala), K Venkatarami Reddy, JEO-Tirupati, CE Chandrasekhar Reddy, SE Ramachandra Reddy, Gopala Krishna –DEO-SRIPAT, VGO – Hanumanthu and Phalguna.
ISSUED BY THE PUBLIC RELATIONS OFFICER, TTDS, TIRUPATI 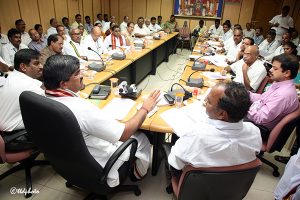 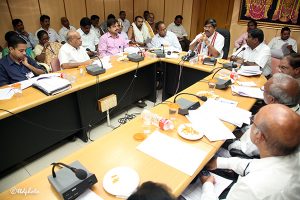 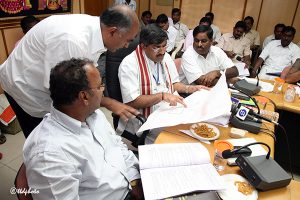