Speaking to media after the foundation ceremony for Goddess Sri Padmavati Ammavaru temple at GN Chetty road in Chennai and the launch of the Gudiko- Gomata campaign in Tamilnadu on Saturday, the TTD chairman said TTD aimed to complete the construction works within one and a half years.

He said it was the TTD goal to provide the blessings of Sri Venkateswara Swamy and support to the poor for meeting the wedding costs of their children by conducting community weddings.

TTD will soon select a Muhurtam and launch the program under which the TTD provides Mangala sutras, Pattu vastrams to bride and groom besides wedding lunch.

He said the cost of Sri Padmavati temple estimated to be around ₹.6.85 crore of which TTD is bearing ₹5.85 crore and the TTD local advisory committee president Sri Sekhar Reddy is contributing ₹1 crore.

TTD Chairman said Tamilnadu Government had agreed to grant 10 acres of land in either ECR road or OMR road towards the construction of Sri Venkateswara temple. Our Engineering officials will visit both places and take a final call, he added.

He said as part of Sanatana Hindu Dharma campaign TTD is building Sri Venkateswara temples at Jammu and Mumbai and is also developing the Kanyakumari temple. 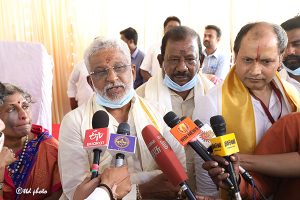