TIRUPATI, DECEMBER 2: Kartheeka Brahmotsavams, the nine-day annual event of Goddess Padmavathi Devi of at the pilgrim town of Tiruchanoor off to a grand start with the conduct of the celestial ceremony of Dhwajarohanam on Thursday morning signaling the successful commencement of the mega religious fete with pomp and gaiety.

The sacred fete has been performed in the temple of Goddess Padmavathi during Makara Lagnam between 9:40am to 10:00am by hoisting the turmeric drape with the image of the divine elephant, the  favourite ride of Goddess atop Dhwajastambham-the temple pillar amidst the traditional recitation of Vedic hymns by temple priests as per the norms of Pancharatra Agama.

The EO has also inaugurated the flower show at Friday Gardens in Tiruchanoor with colourful flowers depicting various mythological themes which was designed and decorated by the Garden department of TTD to entertain the visiting pilgrims. The Mythological themes included “Sagara Madanam”, Gajendra Moksham”, “Brigu Garva Bhangam”, “Panchamukha Anjaneya” etc. Ornamental flowers like Roses, gerania, guineas, poinsettias, kolius, asparagus, Asiatic lilies, carnations have been used for the purpose by the garden department to give a splendid look to the mythological flower show. The TTD garden superintendent Sri Srinivasulu said that about 20thousand pots of the ornamental flowers have been used for the purpose. 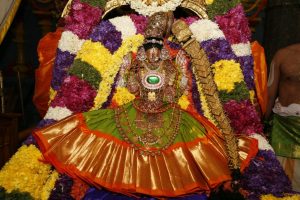 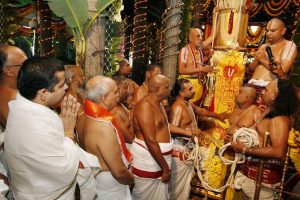 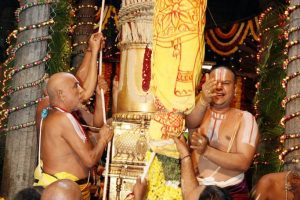 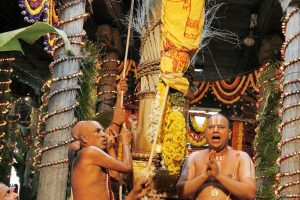