Tirumala, 24 Jul. 20: The Tiruvadippodi Utsavam of Andal Sri Goda Devi was observed at Tirumala on Friday.

As a part of this, Sesha Vastram and Shatari were offered in Purusaivari Tota followed by the religious discourse of Sri Chinna Jiyar Swamy of Tirumala.

According to legend, Andal Sri Goda Devi emerged in Tulasi garden while Sri Anantalwan developed the gardens in Tirumala and commenced Pushpa Kainkaryam to the lord.

Every year, Andal Tiruvadippodi Utsavam is being observed in Purusaivari Tota since several centuries.

Andal who is believed to be the incarnation of Bhudevi was found to the great Sri Vaishnavaite devotee Sri Vishnuchitta in Tulasi garden on the auspicious day of Purva Phalguni Nakshatra in Ashada Sukla Chaturdi,

In Kataka month on the advent of the same auspicious star and tithi, Andal Tiruvadippodi Utsavam is being observed in Tirumala every year. 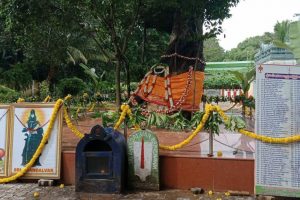 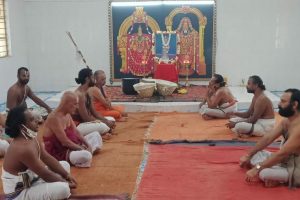