TIRUMALA, 06 OCTOBER 2022: Fervour marked the Bagh Savari festival observed at Tirumala on Thursday evening. The festival which would be observed on the immediate day after the conclusion of the nine-day Brahmotsavam has a great religious significance attached to it.

According to the temple legends, Sri Venkateswara and His Consort in the guise of ordinary humans destroy the flower gardens grown up by Ananthalwar, a great devotee of the Lord only to testify his dedicated devotion.

In a bid to catch-hold of the divine “Human Couple”, Ananthalwar succeeds in tying up Goddess to an Aswatha tree in his garden while the Lord escapes from his clutches running anti-clockwise. Later, Ananthalwar realises his mistake and carries the Goddess in a floral basket to the Srivari temple and rejoins her with the Lord.

To mark the anti-clockwise running of the Lord, this festival is believed to be conducted in an anti-clockwise manner. In connection with the festival, the processional deities of Lord Malayappa Swamy and His consorts were taken around in a procession from the main temple to the Ananthalwar gardens situated on the southwest corner of the temple complex.

After observing certain religious formalities at the gardens, the deities were again taken back to the main temple.

Peishkar Sri Srihari, descendants of Sri Anantalwar and others were present. 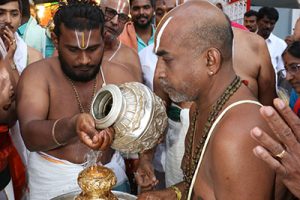 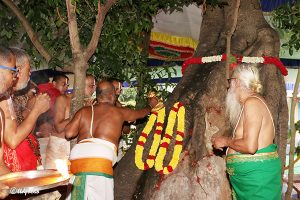 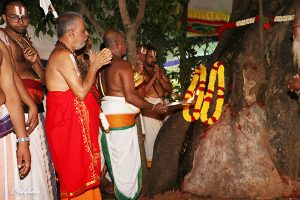 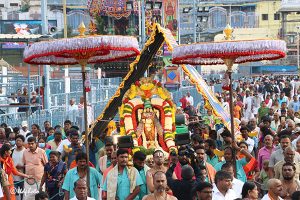 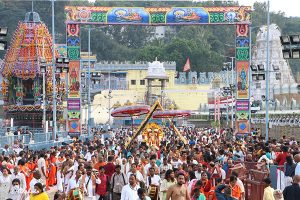 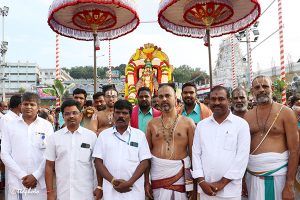 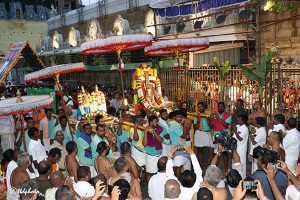