Vizianagaram 30 July 2010: Govinda kalyanam is conducted at Gumma Lakshmipuram in Vizianagaram district on Wednesday in a grand manner.  Sri I Y R Krishna Rao, Executive Officer, TTD while addressing the devotees he said that the TTD in conducting such Govinda Kalyanams as part of Dharma Pracharam in rural areas. Earlier the same Kalyanams were conducted in five rural areas of the East Godavari district.  Next month onwards, the TTD is also planning to conduct similar Kalyanotsavams in Fishermen Villages in the coastal belt he added. The Tirumala Tirupati Devasthanams medical and ayurvedic doctors with paramedical staff conducted a medical camp and distributed medicines to the Tribals.  Dr Medasani Mohan, Director, Annamacharya Project Sri Korada Ramakrishna, Co-Ordinator, and Sri Srinivas Executive Engineer have Co-ordinated the entire event.  Sri Janardhan Thataraju, Local MLA., ZPTC, MPTC, Sarpanches, Sri Vari Sevaks and a large number of devotees has participated.

Sri Srinivasa Kalyanotsavams organized by the TTD received tremendous response and adoration across the country.  With the experience gained by organizing these kalyanams vis-à-vis the demand for similar replication of the event down the line at the grassroots level, it has become imperative that TTD should launch this divine event at the Mandal level in each district starting with the East Godavari from the agency areas.  My whirlwind tour of the agency area during Kalyanamastu phase-5 gave me an impression that unless and until we reach the people at the agency area with the divine message that God as the father, we as His children, where the mass of people are vulnerable to conversions, it is difficult to preserve, protect and promote the Hindu culture and the Hindu traditions to which the TTD is committed through its various wings like the Hindu Dharma Prachara Parishad Central / District / Mandal Dharmic councils and other allied projects.  We have so far organized about 70 Sree Sreenivasa Kalyanams across the country from the tip of Himalayas down to Cape Commerin, involving huge lakhs of devotees and cross-sections of the people.  These divine events have positively contributed to the process of divinization of community.  The strength and support bases for any divine culture lie in the grass-root level community.

Already the HDPP has made strong impacts on the minds of the public in the rural areas through its district-based agencies popularizing the Sanatana Dharmic values and norms of good life pregnant in our puranas, sastras and other related works through audio visual and theatric performances.

Sri I.Y.R. Krishna Rao, IAS, EO, TTD, has taken clue during his interactions with the public through DIAL YOUR E.O to undertake the mission with zeal and enthusiasm involving the tribal people.  The TTD could help networking with the TTD and the Govt agencies already committed this and working through Endowments Department in main.

God had chosen forests as His dwelling places when we understand Naimisa Aranyam and its background origin.  We have several rishis and hermits like Bharadwaja, Atri, Vasishta, Gowtama, divine personalities like Lady Sabari and Guha, who hosted Rama and Lakshmana during their sojourn in the forest, the disciplined and skilled youth like Ekalavya, great teachers like Vyasa and Drona, Bhagavata Uttamas like Suka and so on.  These are the people that were so favoured fabulously by God, and we need to remind them of their cultural ethos and background and take the message of Lord Venkateswara, none other than GOVINDA in Kaliyuga that we as Hindus are members of the same family fathered by Lord Govinda and forge the bonds of fraternity and universal family.

It is high time that we need to provide certain community assets like temples or mandirs installing or consecrating Lord Venkateswara’s idols there at once and provide some thatched shelters as Dammakka did for Lord Rama of Bharadrachalam those days, which has gradually evolved as the focal temple of worship for Indians at length.  We have already schemes approved by the TTD Board to provide these idols and mikesets free of cost for these Dalitwads or tribal hamlets.  We have to gear up the machinery with missionary zeal to protect our culture and our brothern. SREE GOVINDA KALYANAMS is the only way to generate the spirit of Bhakti and to motivate the people towards their home theme of Vedic Culture.  The Endowments Department, the ITDA and the TTD together with the like-minded organizations have to work in tandem and take this flagship programme to the  masses and the classes at the agency areas initially and continue this current across the state of Andhra Pradesh, by involving and roping in the SVETA-trained archaks hailing from these agency areas and making them the formidable agents with our backup support and guidance.

While we are naming Sree Vari Kalyanams in respect of the usual paraphernalia moving by Sreevari Radham with full complement of staff  – secular and religious and organized Sree Vari Kalyanam at bout 70 places so far in the urban and metropolis, we may name this as  Sri  GOVINDA KALYANAM  for organizing Sree Vari Kalyanam in the rural and agency areas with minimum support services and infrastructure.  This helps economy, efficiency, flexibility and adaptability duly replicating the process of the celebration.

The Radhams already used for Chaturyugabandha bhakti chaitanya yatra are being used for Govinda Kalyanams also, duly refurbishing and restructuring the automobile unit to facilitate the event efficiently.  The idols already available with the HDPP District centres will only be used for Govinda Kalyanam and the DPP Dist coordinator is in-charge of these idols and would personally ensure their safety, security, upkeep and decoration for the event, till a new set of big idols are procured for the purpose.

Keeping this in the backdrop,  Dr.C.VIJAYA  RAGHAVACHARYULU,  former Secretary of Hindu Dharma Prachara Parishad, TTD, has been entrusted with the task of organizing these Govinda kalyanams in the agency areas as Officer on Special Duty (OSD).  This project will function as an integral part of the Annamacharya Project, TTD.

The OSD has designed a detailed blueprint about the objectives, strategies and functional dynamics of the organization of Sree Govinda Kalyanams (SGK).

TO STRETCH THE REACH TO THE UNREACHED IN ENJOYING THE GRANDEUR OF SREE VARI KALYANAOTSAVAM AMONG THE TRIBAL POPULATION INSTANTLY AND DIRECTLY AS TTD DOES IN THE CITIES, METROPOLIS AND TO REPLICATE THE SAME IN AN EXACT MANNER.

TO FACILITATE THOSE WHO CAN NOT AFFORD THE COST AND STRESS IN SERVING LORD VENKATESWARA BY SREE VARI KALYANOTSAVAM.

TO ENRICH THE TRIBAL CITIZENS TO HAVEN THE FEELING OF PERFORMING SREE VARI KALYANAM BY CHANTING THEIR GOTRAM, NAMAM AND FAMILY MEMBERS

TO INFUSE A SPIRIT OF SOCIAL COHESION,. SOCIAL HARMONY, NATIONAL INTEGRATION AND TO FORGE A SENSE OF GLOBAL FAMILY.

TO REMIND THE SIGNIFICANCE OF THE BACKGROUND OF FORESTS, ILLUSTRIOUS PERSONALITIES LIKE VYASA, VALMIKI, VISWAMITRA, ATRI, WOMEN LIKE GARGI, MAITREYI, AHALYA, SABARI AND SKILLED AND DISCIPLINED YOUTH LIKE EKALAVYA, ARJUNA ETC

Phase I of Sree Govinda Kalyanams has been successfully organized in the following 8 centres of agency Mandal centres of Gangavaram, Addategala, Y. Ramavaram, Rajavommangi, Rampachodavaram, Maredumilli, Devipatnam and Yeleswaram.

The elected representatives of the local constituencies such as, MP, MLA, ZPTC, MPTC, Sarpaches etc. have participated. The Board Member Sri RSP Rao, MLA, Rajahmundry has also graced at different venues.

The Executive Officer, TTD, himself has graced at Y. Ramavaram and a message has been sent that TTD is committed to the SGK to divinize the community with the active participation of the local leaders, and like-minded organizations, Dist and Mandal Dharmic Councils etc.

Sree Venkateswara Bhakti Channel (SVBC) has made LIVE TELECAST of these Kalyanams atleast at 3 places which impacted the viewers so strongly and vibrantly virtually converting every home into ANANDA NILAYAM, the Abode of the Lord.

Though the Agency areas and the venues are located in dense forests,. The response and the cooperation of different organizations like Viswa Hindu Parishad and others is extremely laudable.

No special facilitation or expenditure is incurred on media management. But their response and coverage in the media is by far excellent.

People of the tribal hamlets located at far off places in the hilly terrains trekked about 50 Kms braving hot sun and thorny route attended in thousands. Actually, our expectation was so limited to a maximum of 1000 to 3000, but the actual attendance was from 5000 to 12000.

We have promised to construct Lord Venkateswara temples at these 8 venues and already it has been done at Godavari Plywood Ltd by installing one idol as a token of launching the project.

Swamiji’s, Jeeyars and other Head of Mutts have attended the Kalyanams and lent great support to the mission.

Our staff numbering about 70 have rendered excellent service by staying on the campus for over 22 days.

Godavari Plywood Ltd. (GPL) had give us great support by making available their guest houses, campus and other civic facilities free of cost and helped as during crisis like unprecedented rain, thunders etc and arranging Kalyanam at Rampachodavaram so immediately.

PHASE –II FROM 27TH MAY TO 7TH JUNE, 2010 AT VISAKHAPATNAM AGENCY MANDAL CENTRES

Cut in the expenditure

Cut in the publicity expenses.

Phase-II in Visakhapatnam agency mandal centers has been a greater success with the massive participation of devotees who thronged in thousands and demonstrated a rare sense of divine discipline, piety and adoration for Lord Venkateswara. The organization of SGK in the interior forest areas like G.Madugula, Koyyuru and G.K. Veedhi proved highly successful  where the thousands of unlettered or semi – lettered devotees have witnessed the majestic scene of idols decorated and they danced in their traditional hores and themes making the event a fine picturesque scene of celestial beauty. A distinct mention has to be made about the laudable participation, coordination and involvement of the District Dharmik Advisory Council (DDAC) of Visakhapatnam through its president Dr.Vijaya Kumar, and the Secretary Sri GRK Prasad (Rambabu), the Chief Coordinator of the Phase-II and Sri Jagat Rao, the Base-camp Manager at Paderu., who stayed with the campers and conducted the events with extreme care and concern.

Dr. N. Yuvaraj, the Joint E.O. TTD has participated in the SGK organized at Chintapalli, while the local MLC, MLA, ZPTC, and Chairman attended with the families at Narsipatnam and made it a remarkable success. The SVBC has made the programme a LIVE BROADCAST to the great delight of millions of viewers across the globe. The EO, TTD has been constantly in touch with the processes and guiding the task from time to time.;

At the proposal of the tribal leader and the public, the EO, TTD has immediately arranged imposing idols separately carved out measuring almost similar height of the Malayappa Swami with His Divine consorts for the SGK and made it ready for Phase-III planned in Vizianagaram and Srikakulam Districts from 25th  June to 2nd July, 2010.

The Phase III will conclude the series of SGKs in the East Coast of Andhra Pradesh Agency areas and would stretch further into the other agency areas of the state. 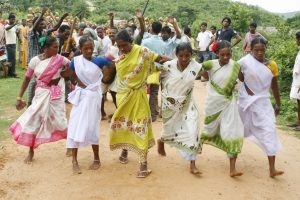 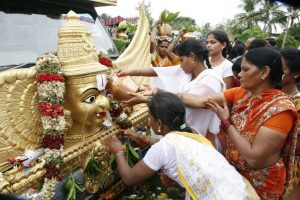 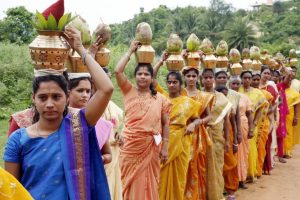 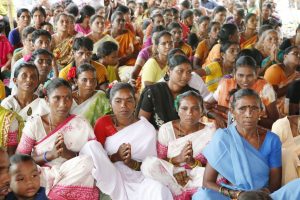 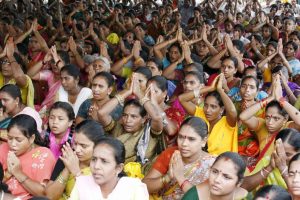 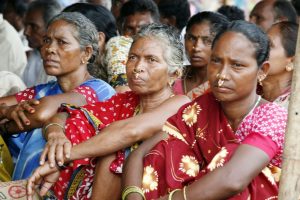 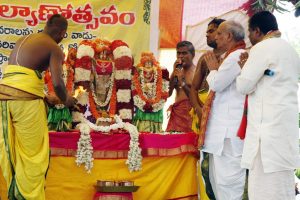 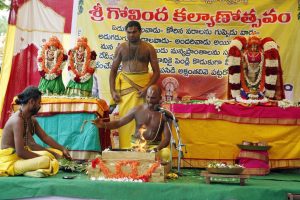 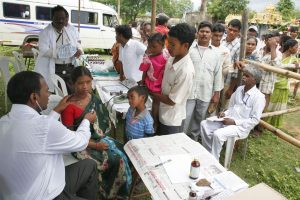 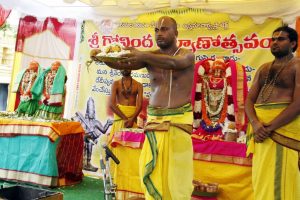 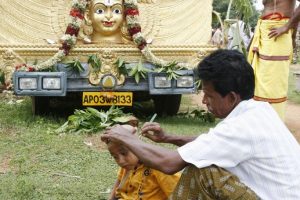