Tirupati, 17 Jan. 20: The annual brahmotsavams in Sri Prasanna Venkataramana temple in Devunikadapa of YSR district will be observed from January 26 to February 4, with Ankurarpanam on January 25, said JEO Sri P Basanth Kumar.

The JEO who released the posters related to this annual event in his chambers in TTD Administrative building in Tirupati on Friday along with the Outside Temples DyEO Sri C Govindarajan said, the big festival will be organized by TTD for nine days in a religious manner with Dhwajarohanam on January 26, Garuda Seva on January 30, Kalyanotsavam on January 31, Rathotsavam on February 1 and Chakrasnanam on February 3.

He said, the annual Pushpayagam will be observed on February 4 in the evening between 6pm and 9pm. 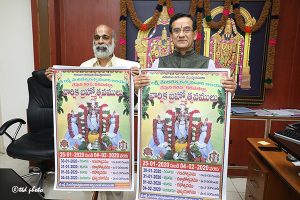