On Friday morning he inaugurated the Corona Virus Awareness and Counselling Centre at Alipiri Check Point along with Addnl.EO Sri AV Dharma Reddy and CVSO Sri Gopinath Jatti and said as a part of state and central government initiatives against spread of corona virus, TTD has scaled up steps to arrest its impact in Tirumala as the Hill Town is visited by scores of pilgrims everyday from across the country.

The EO said that the Honourable Chief Minister Sri YS Jagan Mohan Reddy and health secretary of the state health department reviewed and made several suggestions to TTD. Accordingly corona virus prevention camps have been set up with thermal scanning testing at Alipiri check point, near Padala mandapam at Alipiri footpath route and also at Srivari mettu footpath route. “If any symptoms are identified, the pilgrim will be stopped from entering Tirumala and diverted to isolation wards at Ruia hospital for medication “, he added.

The EO said special focus has been laid on sanitation and cleaning is taken up at an interval of every two hours in Tirumala where pilgrim congregation is more including PACs, Anna Prasadam complex, Vaikuntam queue complex and Kalyanakattas.

OPTIONS FOR CHANGE OF DARSHAN TICKETS:

TTD has provided option of change of dates or refund on cancellation for devotees holding arjitha seva, Rs.300 darshan and accommodation that are booked in advance till May 31.

In view of Government of India not issuing visas to foreigners till April 15, TTD has also appealed to both NRIs and foreigners to postpone their pilgrimage to Tirumala for 28 days from the day they stepped in India.

The EO said on the appeal of State Health Secretary, the Padmavati Nilayam at Tiruchanoor has been allowed to be utilised as Isolation ward in view of Corona Virus threat. If needed the TTD choultries near Tirupati railway station will also be allotted for the same purpose upon the request of District Collector.

The TTD EO said one lakh hand bills were distributed every day and non-stop broadcast of precautionary steps are being arranged throughout the day at Tirumala for the awareness of the pilgrims.

He said the crowd rush to Tirumala has reduced and devotees with time slots could have easy darshan without waiting in the Vaikuntam queue lines.

As a matter of abundant precaution in view of Corona, it has been instructed to allow only 250 devotees in each compartment of Vaikuntham Queue Complex as against the usual figure of 450-500 people to avoid infectious spread if any.

Special precautionary steps for devotees are being telecasted through SVBC channel in waiting compartments and other platforms and health and medical departments of TTD are fully equipped with all emergency materials, he noted. 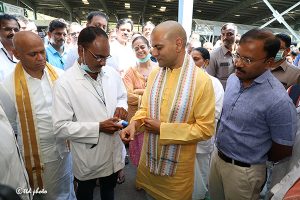 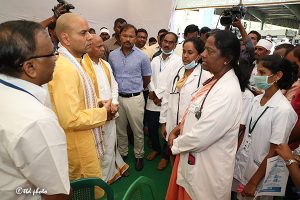 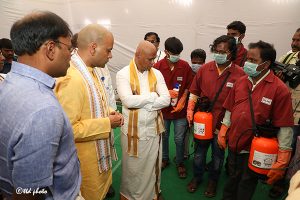 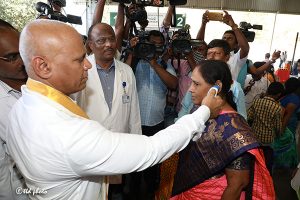