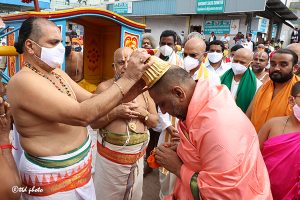 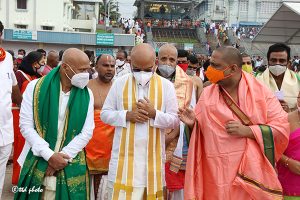 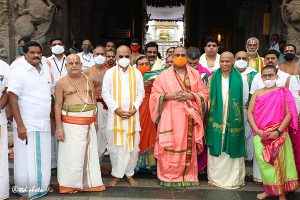 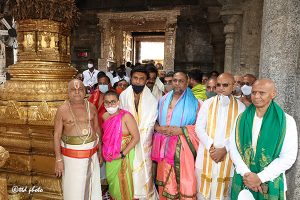 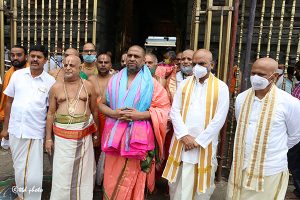 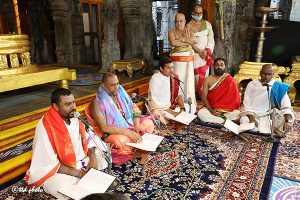 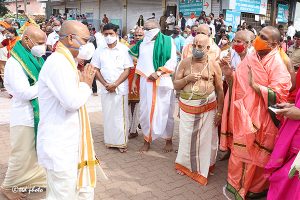 Earlier on his arrival, he was received with traditional Isthikaphal Honours (Pedda Maryada) amidst chanting of Veda Mantras at the sacred fig tree located near Old Annaprasadam Complex. After offering prayers to Bedi Anjaneya Swamy temple, he was led to Tirumala temple. He was welcomed and accompanied by TTD EO Dr KS Jawahar Reddy and Additional EO Sri AV Dharma Reddy.

Speaking to media persons outside the Tirumala temple, after darshan of Lord Venkateswara he said, the bond between Tirumala temple and Mantralaya Mutt has been continuing for a long time. “Mantralaya Mutt established by Sadguru Sri Raghavendra Swami has been following and preaching the tenets of Dvaita Siddhanta advocated by Sri Madhwacharya. Lord Venkateswara is the Kula Daiva of Sri Raghavendra Swamy. We are continuing the tradition of visiting Tirumala temple every year and offering prayers to Lord. With the blessings of the Supreme Lord, the world will be free from Corona pandemic soon”, he asserted.

Adding further, he hailed the decision of TTD board and mandarins to open Vaikunta Dwaram for ten days starting from Vaikuntha Ekadasi. “This decision has been taken by TTD after consulting the Peethadhipathis, Agama Scholars and all the religious stalwarts. There is no deviation of Agama Shastra and a laudable decision in the larger interests of the pilgrims”, he maintained.

Earlier, the Pontiff also participated in the Rig Veda Parayanam at Ranganayakula Mandapam in Tirumala temple.