TIRUMALA, SEPT 16:  The world famous pilgrim town of Tirumala has geared up to celebrate the nine-day mega religious event of annual salakatla brahmotsavams of Lord Venakteswara which are scheduled to take place from 18th September to 26th September said TTD EO Sri LV Subramanyam.
Addressing the media persons over the elaborate arrangements made by TTD for annual brahmotsavams the EO said, the Hon’ble CM of AP will present silk vastrams to Lord Venkateswara on behalf of the State Government on the first day of Brahmotsavams which commences with Dhwajarohanam on September 18. “The CM will also lay foundation stone to second phase of Tiruvenkatapatham Ring road at Tirumala mulled at an estimated cost of Rs.11cr. Similarly he will also lay foundation stone to “Sri Vakulamatha” rest house which is coming up adjacent to Nandakam Guest House with an estimated cost of Rs.25cr”, he added.
Sri Subramanyam said TTD is planning to bring out Old Annaprasadam Complex for the utility of general pilgrims during Navarathri Brahmotsavams which are slated to start from October 15 to October 23. “We have constructed 116 Bath Rooms and 55 toilets for the sake of visiting pilgrims. This will be very useful to those pilgrims who come up with less baggage. Apart from this we are also planning to operate centralised cellphone and luggage keeping centre from this point and also to open up some laddu issuing counters so as to de-congest the pilgrim crowd near laddu counters”, he added.
Meanwhile the EO TTD will release a series of spiritual books, pamphlets on ancient coins. inscriptions, sacred teerthams during brahmotsavams. “CM will release all these books at the Nada Neerajana Mandapam”, he said.
Elaborating further on other arrangements the EO said, the RTC will run 3000 trips per day during brahmtosavams. “They will operate bus services every minute as in the case of last year. This year also we have put total ban on two-wheelers on Garuda Seva Day”, EO maintained.
“Thousands of bhajan mandalis will be taking part in this brahmotsavams showcasing their artistic skills in different guises. We are also expecting musical concerts by our Asthana Vidhwans Sri Nedanuri Krishnamurthy and Dr Managalampalli Balamurali Krishna. This year also we have grands plans for a colourful expo by garden, ayurveda, photo and museum departments to attract pilgrims”.
“On the security front, our vigilance and government police personnel have geared up to give full-fledged security cover. We are holding a buffer stock of 4lakhs laddus during brahmotsavams. The medical department has also taken up extra-measures in the case of any emergency situation”, the EO said.
Later Tirumala JEO Sri KS Srinivasa Raju said, TTD has cancelled all arjitha sevas during brahmotsavams. “Even we have cancelled Rs.50 on Dhwajarohanam and Garuda Seva day. Even the issuance of Rs.300 tickets also depends upon the pilgrim crowd during brahmotsavams. The prime focus is on darshan to common pilgrims which commences from 6am till the end of the day every day. Even there are no VIP darshans on the evenings of 18th, 21st, 22nd, 23rd and 26th of September.
ISSUED BY TTDs PUBLIC RELATIONS OFFICER, TIRUPATI 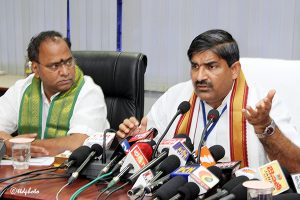 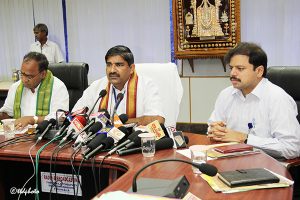