Kanchipuram, 29 September 2012: As a token of spiritual gesture, TTD Trust Board Chairman Sri K Bapiraju gifted silk vastrams to Goddess Kamakshi Amman on behalf of TTD at Kanchipuram on Saturday evening.
Before the commencement of the celestial wedding of the deities Srinivasa Kalyanam, the TTD board chief presented the silk vastrams to the presiding deity of Kamakshi Amman and also to Sri Varadaraja Swamy located in the same temple premises.
Later speaking to media persons outside the Kanchi temple, the TTD board chief said, “With a noble notion to spread Bhakti Cult among denizens across the country as well overseas, TTD has commenced the conduct of “Srinivasa Kalyanams” where in the replicas of processional deites of Lord Malayappa Swamy accompanied by His two Consorts Sridevi and Bhudevi will be performed at different places not only in the country but across the globe.
“This year we had performed series of celestial weddings starting with Mumbai. The programme drew huge crowds in countries like Nepal, America etc. We have been receiving an overwhelming response for these marriages”, he added.
ISSUED BY TTDs PUBLIC RELATIONS OFFICER, TIRUPATI 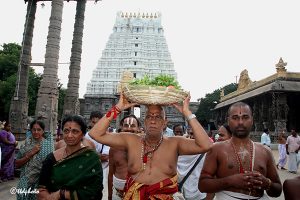 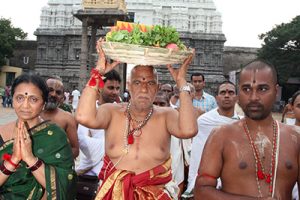 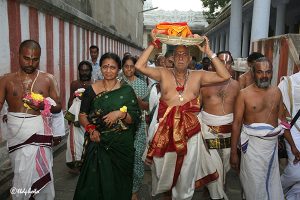 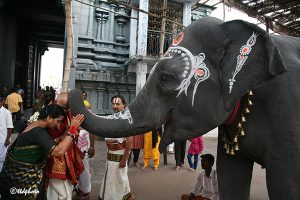