Tirumala, 18 July 2022: TTD EO Sri A V Dharma Reddy directed officials on Monday to implement the complaint tracking system in Tirupati as well for the benefit of the pilgrims who boom rooms in the reception wings of Vishnu Nivasam, Srinivasam and Govindarajaswami Choultries.

During the Senior Officers’ meeting at the Conference Hall of the TTD Administrative Building on Monday evening, the EO instructed officials concerned to complete the ongoing works of the feed mixing plant at SV Goshala, Tirupati before December this year.

Among others, he asked the Engineering officials to begin works on Sri Tarigonda Vengamamba Dhyana Mandiram from August onwards and coordinate with All-India local self-government to promote devotional and pleasant atmosphere at Tirumala. He also reviewed on conducting Go puja at all the TTD temples including recently taken over ones.

He also interacted with GMR officials on issue of the transfer of pilgrims luggage to Tirumala adopting the latest technology.

CVSO Sri Narasimha Kishore also made a PPP on the maintenance of luggage counters. 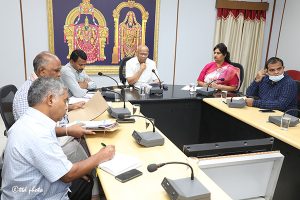 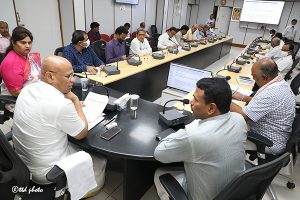