Tirumala, Oct 09: His name Venkataramaiah has attained a new definition and dimension – He is Sannidhi Venkataramaiah in recognition of his hereditary services to Lord Venkateswara at the Srivari Temple.

Through a cow herd by birth and caste Venkatarayamaih and his family have been serving the Lord Venkateswara for generations. His is the 13th generation. He is the first person and also the last person to have the darshan of Venkateswara every day in the early morning and also late at night.

After the srivari temple door- Bangaru Vakili – is opened in the early hours , the cow herd – Venkataramaiah or his sons are the first to enter the temple and get the first view of Lord Venkateswara. Next to the priests, they are the only human beings who get the full view of the sacred deity in its non-public darshan attire.

Either himself or his sons and grandsons today render the service dutifully. They wake up at Brahma muhurtam (4 AM) and present themselves at the main gate of the temple with tilak and in bright white attire.

Their duty is to visit the house of the priests and request them to come to duty. Along with the priests they appear at the golden door of the sanctum of Srivari Temple. He is also fortunate to be the last person to have darshan of the deity after the completion of ekantha Seva after midnight.

“I have been performing this function along with my grandfather since I was six year old,”  says Venkataramaiah who has been in TTD service for almost a quarter-century or even more.

Now that Venkataramaiah is seventy year old , his son Padmanabham  and  his brothers son Ramesh are shouldering  the responsibility to be the first persons who get into his view every day,

Virtually it is only Venkataramaiah who can get into the temple as the priests and others wait for him to enter through the golden gates of Ananda Nilayam, as the sanctum is referred to in the temple Administration parlance. Legend says that the deity had granted this boon to the cow herd who repented after injuring the Lord who allegedly was milking one cow in the forest.

ISSUED BY THE PRO, TTDS,TIRUPATI 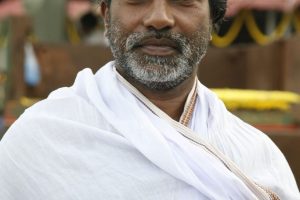 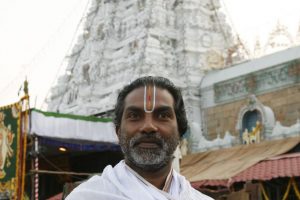