Spl story on   IT SERVICES IN TTD

Tirumala, 9 October 2010:  Tirumala Tirupati Devasthanams has launched an ambitious program to adapt Information Technology in serving the pilgrims more effectively and to their satisfaction.

The technology up-gradation of the ERP systems is underway and will ensure a virus-free and flap-free environment in the TTD’s over 48 departments aimed at streamlining the administration in both the back office and front office units.

Executive Officer of the TTD  Sri I Y R Krishna Rao said adaptation of the IT will put an end to manual handling of sevas, accommodation and also other crucial functions in the temple administration.

We have launched IT adaptation since last few years and hope to complete the exercise in a few months by providing a foolproof platform he said.

The TTD  already operated a 24×7 call centre offering information to callers on services, sevas, accommodation and also darshan available at Tirumala.  All the departments are also computerised and now the process is on to network them completely so that with push of one button one could know what was happening everywhere.

Presently Seva tickets and accommodation services were placed on the IT platform. One could book their sevas including  50  rupees Sudarshan tickets from 75 locations for a maximum of 3  days to   60 days in advance.  However on the online booking through ttdsevaonline.com one could book this sevas for a maximum of  90 days in advance “ said    Bhaskar, head of  EDP  in TTD.  Sudarshan tickets are sold only in six locations in the Tirupati temple town.

He said all the flaps in the computer network has been set right as of  April 2009. There was no technology failure and as of now there is nothing wrong with our advance booking systems “. TTD has introduced both photo id and bio-metric   (thumb impression ) for all Seva tickets and also other services.

TTD is also working on the introduction of   pre-paid  plastics   ( smart cards |) which would  provide  payment gateways  for all services  at all counters .” The Sri Seva concept of services on the anvil will provide an umbrella for single-window service to the devotees. “ Once the service has been installed the devotees has to approach one of the numerous counters in the Sri Seva complex at  Tirumala for getting tickets and tokens for all services at one go, “  said  Executive officer, Sri  I Y  R Krishna Rao.

Rao said the Specified Authority of TTD has drawn up a massive program to bring about a pilgrim-devotee interface on a regular and annualized basis so that the pilgrims could be advised of the best time to visit Tirumala for a more enchanting and enriching divine experience.

He said even advance booking on online is now guarded with email id proof  firewalls so that the same person can not book more sevas and services on the same day and only after a break of a gestation period of over  180 days. “The objective is to ensure that many more devotees could get the advantage and also reducing the scope of malpractices, “ he said.

The  IT has been introduced in all the back office, purchasing, marketing and security functions in the TTD. “Introduction for IT has helped to provide more comforts and convenience to devotees who come to Tirumala and also avoid overlapping, congestion and disappointments to devotees at peak seasons, “ he said.

TTD has also set up a  trust and fund for promoting  IT  services in the temple administration for which donations in cash and kind were requested. “ We have made extensive investments in IT adaptations with an objective to eliminate manual operations its obvious lacunaes “ said the EO.

All the security installations of TTD  both at  Tirumala and Tirupati are manned by the HCL while the other portals were configured and supported by the  TCS. “ Our unique platforms like e-Seva, e-hundi and e-darshan have received very good response from all over, particularly the  NRI,” said  Bhaskar.

TTD has also called for new tenders for fresh technology up-gradation of its back-office installations and services to introduce more temple-pilgrim interface and ERP solutions. “We have already installed Tally and other Gateways.  Our e-hundi and e-Seva services are now manned by the Citibank while the ICICI handled the e-donations “.

The TTD official said that talks were on with some other banks like the SBI, HDFC, Indian Bank, BOB and PNB for various e-services of the  TTD.

“ In the next two years we will be completing our  IT up gradation in the TTD  on all counts  “ he said. 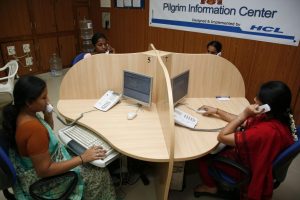 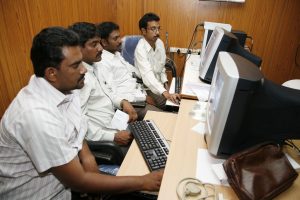