Tirupati, 24 Feb. 22: All the projects of TTD should plan an action plan to take up and execute the Hindu Dharma Prachara activities in a wide spread manner in remote areas, said, TTD Additional EO Sri AV Dharma Reddy.

During the review meeting on all projects of TTD held at Sri Padmavathi Rest House in Tirupati on Thursday, the Additional EO directs the Chiefs of Annamacharya, Dasa Sahitya, Vengamamba, Alwar Divyaprabandha and other projects to jointly organize the Dharmic programmes by organising district level co-ordination meetings, actively involving local NGOs and Srivari sevakulu.

He directed the Kalyanotsavam Project to prepare an action plan to organize more Srinivasa Kalyanams as part of Hindu Dharma Prachara.

He said, five out of 18 Puranas were completed by TTD with Artha and Tatparya. He asked the officials concerned to complete the works of the remaining puranas also with a specific time frame in two years.

He later instructed the SV Higher Vedic Studies Institute to organize Chaturveda Havanam and conduct Veda Sabhas like before. And directed the concerned to come out with other works of Vengamamba, compose songs with the remaining songs of Annamacharya and Dasa Sankeertans as well.

The additional EO has instructed to give wide publicity to TTD Hindu Dharma activities in SVBC and Sapthagiri Magazine. 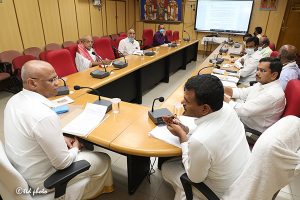 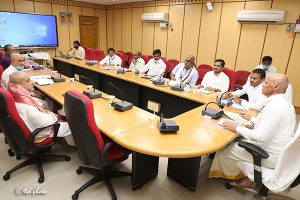 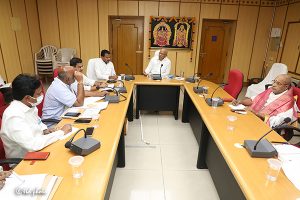